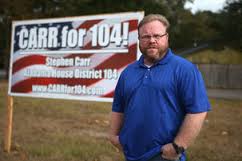 On Thursday, Stephen P. Carr II announced his gratitude to the University of South Alabama College Democrats for their endorsement of his candidacy for the Alabama House of Representatives in the District 104 Special General Election on January 28.

The Carr Campaign said in a written statement that they were, “Pleased to announce that we have been endorsed by the University of South Alabama College Democrats for the Special Election for House District 104. This is yet another sign, along with our earlier endorsement by the Alabama Young Democrats, that our campaign is relevant to young voters as they consider their future.”

The Carr Campaign continued, “Our campaign is proud to say that we are working for ALL constituents in an effort to secure long term stability for our economy, raising the standard of living for families through job creation, and demonstrating that we are able to work across party lines in all areas of government for the purpose of making sure that our young people will choose to live and work here in the years to come.”

The Carr Campaign statement concluded, “No matter what side of the isle, we are working for Alabama and a brighter future for all. Mr. Carr is elated to have the support of young voters, for they are our future policymakers .He is truly a qualified candidate that reaches out to all citizens. He has fought for our country in its time of need and has worked side by side with disaster recovery efforts in Alabama and Mississippi. Please join our campaign and support our efforts so that we can cross the victory line together on January 28th.”

Stephen Carr said in a November statement, “This (the January 28 special general election) will be the first election of 2014 for an open Alabama House seat and it marks a very important opportunity for voters to send a message to Montgomery that the Supermajority politics of the last three years has not worked on the behalf of our citizens. In fact, the Supermajority in Montgomery has not created adequate job growth, has not ensured that our public education system has a continual chance to succeed, and has not looked out for the interests of our seniors, veterans, low and middle income workers, and has not set us on a path that makes Alabama a relevant player on the National Political scene.”

Carr said that on January 28th, “Voters have a chance to send a Veteran, Father, small business owner, man of faith, and lifelong public servant to Montgomery to represent the people, not big business or special interests! Voters have an opportunity to stand up to politics as usual and to send a representative who will bring Montgomery back to them for a change! Voters’ voices in this district have remained unheard for far too long and it is time to finally take a stand and to send a man who will fight for the interests of all people, not just a select few who have the money and influence to force other voices out of the conversation.”

The House District 104 seat became vacant following the resignation of Representative Jim Barton (R) this past August when he left to pursue a job opportunity as a professional lobbyist. The winner will serve the remainder of Barton’s term and will still have to face re-election in November 2014 along with every other seat in the Alabama Legislature.

House District 104 is located in the southern section of Mobile County and stretches from I-65 to the Mississippi line.