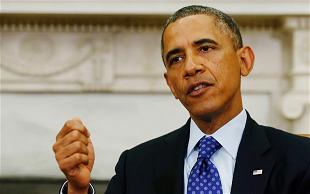 Money is the lifeblood of politics.  Money donated to campaigns pays for every bumper sticker, yard sign, bill board, television and radio ad, direct mail piece, email, internet banner ad, and the team of consultants, pollsters, and strategists which advise candidates how to deploy their time and resources. No one understands this better than President Obama and nobody has a better track record of identifying his supporters and getting them to contribute to their campaigns.

Americans have literally spent $billions to elect and re-elect the Illinois Democrat to our Nation’s highest office……and he is not done yet.  The Democrats and the Republicans are locked in a war over control of the Congress.  The Republicans want control of the U.S. Senate for the first time since 2006 and the Democrats want to build on their Senate majority and take control of the U.S. House of Representatives.  In his role as the de facto head of the Democratic Party, President Obama is raising money for Democratic candidates in the House and Senate.

Over the weekend he sent out an email to supporters across the country begging for them to dig deeper to support Democratic candidates.  The President wrote,

“Over the past few years, a lot has changed — for instance, we’ve doubled the number of dogs in the White House. I can also count a few more gray hairs.  But one thing has remained constant: the support I can count on from you, and I can’t tell you how much I appreciate that.”

President Obama continued, “We’ve made enormous progress together. We made sure that we didn’t slip into another Great Depression, we’ve ended a war, we made it easier for young people to afford to go to college, and we’ve taken historic steps to make sure that you won’t go broke just because you get sick.   I can’t wait to see what we’re going to do together in the years to come.   So before the midnight deadline, chip in $10 or more, and let’s go make sure next year is just as productive as the past five have been.”

Republicans, on the other hand, question the productivity of the last five years and would like to see some changes over the next three years.  What we do know from political history is that the side which wins the battle for the dollars usually translates that into winning the battle for votes.

Whatever happens in the 2014 elections in the State of Alabama, The Alabama Political Reporter will be here covering it in a level of detail and balance that you will not find from any other news source in this state.

Opinion | The emperor has no votes

The outcry of illegalities over the recent election is simply the latest example of just how far they'll go.