A bill by Senator Cam Ward pre-filed in preparation for the upcoming state legislative session, which begins tomorrow, is currently facing serious criticism from Democrats in the legislature as well as nonprofit justice advocacy groups.

Senate Bill 84, sponsored by the 14th District Republican, would repeal an amendment to the Habitual Offender Act, Alabama’s version of the three strikes law, that held retroactive an earlier provision allowing for the appeal of life without parole mandatory sentences for nonviolent offenders. While it may sound complex, given relevant context, the particulars of SB84 are simple.

Following at the footsteps of Texas, which passed similar legislation in 1974, Alabama in 1977 passed what is known as the Habitual Offenders Act. It provided – without exception –that those who had been convicted of three felony crimes were to be sentenced to certain mandatory minimum sentences, with the desired effect of reducing recidivism by being “tough on crime.” In cases where the fourth offense, for example, was a Class A felony where the usual sentence would be 10-99 years with the automatic possibility of parole, the new mandatory minimum assessed for the crime would be life in prison with no possibility of parole; for a Class B fourth offense, a mandatory of life with the possibility of parole would be the minimum sentence.

Under that scheme, sentence averages in Alabama exploded, and incarceration rates among the general population did, too. In 1977, only 1.5 percent of Alabamians were incarcerated; today, .65 percent of Alabamians are living at taxpayer expense in prisons and jails across the state. There are more inmates in state correctional facilities today solely under the Habitual Offenders Act, around 8,000, than there were in 1977 for any crime at all, approximately 5,500.

Incarceration rates from 1977 are from the Equal Justice Initiative:
http://www.eji.org/files/Prison%20Crisis.pdf

Incarceration rates from today are from the Alabama Department of Corrections, realtime: http://www.doc.state.al.us/InmateSearch.aspx

Examples of egregious prosecutions under the law gained national fame. Jerald Sanders, who had stolen a $16 bicycle from a back porch of a home in northern Alabama, received a life without parole sentence because of drug convictions decades earlier. Lydia Diane Jones was also sentenced to life without parole for drug charges involving marijuana and cocaine that were found in a home occupied by her ex-boyfriend; she had come to the house to gather clothes she had left behind. Her prior convictions included charges stemming from using a forged check for food at a local grocery store.

Amendments to the Habitual Offenders Act

Realizing the impact of the wide net the law was casting over nonviolent offenders as well as hardened criminals, many in the Alabama Legislature supported, and eventually passed, an amendment to the 1977 law that provided “consideration of early parole of each nonviolent convicted offender based on evaluations performed by the Department of Corrections and approved by the Board of Pardons and Paroles and submitted to the court.”

In 2001, at the support of now passed civil rights leader and Democratic Representative Demetrius Newton, and upon realizing the backlog of nonviolent offenders convicted prior to the amendment, the Alabama Legislature passed a bill that allowed application for those with convictions before 2000. In effect, all nonviolent inmates would be able to call for reconsideration of their sentencing under the new version of law. According to the legislators who passed the bill, the express purpose of the amendment was to “to provide further for eligibility for parole consideration of non-violent offenders.”

The passage of the amendments, however, did not immediately lead to the release of any inmates or any considerations of parole. Immediately after the amendment’s passage, then-Governor Don Siegelman issued an executive order directing the Department of Correction and the Parole Board to make such regulations as would be necessary to implement the changes. Despite this, the agencies refused, questioning the constitutional validity of the new provisions and denying their implementation them without a judicial clarification.

It would take years for that clarification, but it would come in the form of an opinion of the Supreme Court of Alabama in August of 2004. Junior Mack Kirby, who had been prosecuted under the act prior to 2000, sought relief from Alabama’s highest court, claiming that the new provisions were constitutional and that his request for a new sentence hearing must move forward. In a unanimous Ex Parte opinion, then-Chief Justice Drayton Nabers said that “[The new provision] provides that an inmate may ask the sentencing judge or the presiding judge for relief from a previous sentence imposed pursuant to the [Habitual Offenders Act] and provides that the court is to consider the evaluation of the DOC in considering the inmate’s motion. [It also] clearly confers jurisdiction on the sentencing judge or the presiding judge by giving that judge the power to apply the provisions… retroactively to ‘nonviolent convicted offenders’ and by providing the procedure by which the provisions of the statute are to be applied.”

No longer could Alabama bar eligible inmates from applying for reconsideration of their sentences under the act, even if any changes were to be made solely at the discretion of trial judges.

In 2012, the Alabama Legislature went a step further. In light of ever increasing prison costs and populations, a bill was passed making sentencing guidelines such as those in the amendments presumptive in most cases, taking most discretion away from the judge, and requiring a deference to liberty interests for nonviolent fourth time offenders.

At the time of its passage, Madison County District Attorney Rob Broussard explained his motives to the Alabama Media Group, saying that although in a perfect world all prosecutors could be ‘tough on crime:’

“In the practical, budget-driven world, we understand why we have [these presumptive guidelines]. In this state, as in a lot of jurisdictions, we can about talk justice and what something is worth until we’re blue in the face, unfortunately it’s a money game.Do you have the space to house criminals or not?”

Senator Cam Ward also commented on the then newly-released guidelines:

“Nobody in this process is soft on crime, we’re trying to be smarter about it. Our prisons are at 193 percent of capacity and we spend less than any other state in the country. We’re going to get sued in federal court and they are going to come in and impose a harsh penalty. The problem is, under the current system, we basically have people concerned more with politics than actual results. Sometimes they want to impose sentences that may not fit the crime.”

District Attorney Broussard and Senator Ward’s statements on the topic were in line with what policy experts did – and do – point to as good incarceration policies. 2014’s Alabama Sentencing Commission’s sentencing guidelines say that “…sentencing standards shall take into account and include statewide historically based sentence ranges, including all applicable statutory minimums and sentence enhancement provisions, including the Habitual Felony Offender Act, with adjustments made to reflect current sentencing policies.” The “current policies” referred to are those allowing for reconsideration of nonviolent offender sentences.

With the announcement of his SB84 for the upcoming session, however, it seems policy groups and many state politicians are now at very far odds with Senator Ward’s views, at least on this legislation.

Senate Bill 84 and a War of Ideas

Senate Bill 84, which would repeal the 2001 retroactivity amendment pushed by then Speaker-Pro Tem Demetrius Newton, has some in the justice advocacy community at arms, especially in light of statements by legislators like Ward that show they truly understand the question.

“I sound like broken record but [I] still believe our prison sys[tem] is [the] greatest threat to state budgets,” Senator Ward recently tweeted, “[Throwing] more money at [the prison] sys[tem] not [the] solution. Changing the system is. Keep[ing] violent folks locked up and more alt[ernative] sentencing for non-violent ones is.”

Many groups opposing Ward’s SB84 say the bill would prevent just that. In an APR exclusive, founder and executive director of Montgomery-based nonprofit the Equal Justice Initiative Bryan Stevenson discussed the issue of HB84.

“Alabama legislators have acknowledged and discussed the fact that our overcrowded prisons and runaway spending on unnecessary incarceration has to end,” Stevenson said. “This bill is a step in the wrong direction. We should be seeking ways to expand release opportunities for non-violent offenders, not passing laws to keep them in prison longer.”

As Senator Cam Ward correctly pointed out, Alabama’s correctional facilities are at nearly double their capacity, with over 33,000 inmates housed in accommodations made for under 20,000.

“We cannot seriously address the critical problems facing Alabama’s prisons and prison spending without courageous leadership,” the Harvard grad and NYU professor pointed out. “This proposal does not address the very serious problems that need to be confronted. It’s another unfortunate effort at being tough rather than smart on crime.”

Representative Darrio Melton (D) has also joined in the debate. “When we talk about repeat, nonviolent offenders,” the Selma native told APR, “we should be looking at rehabilitation and address the root causes that lead to this activity. Senator Ward wants to reform Alabama prisons and reduce operating costs, but this law would cause more people to remain behind bars. Instead of locking people up, let’s look at the underlying factors, such as poverty-level wages, a broken educational system and damaged families and communities. Let’s work to fix the state to prevent crime and rehabilitate offenders.”

Senator Ward, a member of the Shelby County delegation, has also pointed out that the legislation would not apply to those cases already in litigation, or cases after the 2000 amendment. In addition, he says that it will involve no increase in prisoner population, and that it only currently involves 82 cases.

*******
Republican Senator Cam Ward has represented the 14th district since 2010, before which he represented it in the House of Representatives for multiple terms.

Representative Darrio Melton was elected to represent the 67th district in 2010. He has pre-filed legislation that would increase the minimum wage in Alabama.

Bryan Stevenson is the founder and director of Montgomery-based nonprofit Equal Justice Initiative, which represents indigent death row inmates. He is a Harvard and Yale University lecturer, and a law professor at New York University.

APR contacted all Democratic members of the Judiciary committee from last session. Only Representative England has responded, and he has not yet let us know his full position. 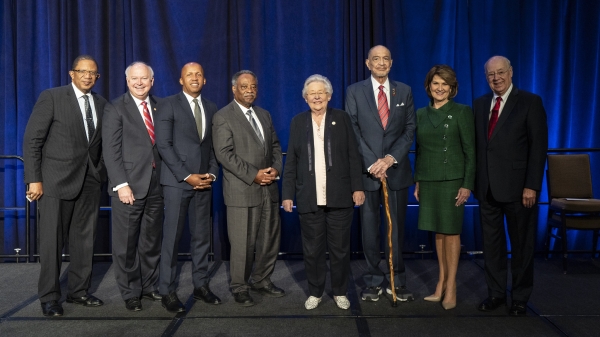