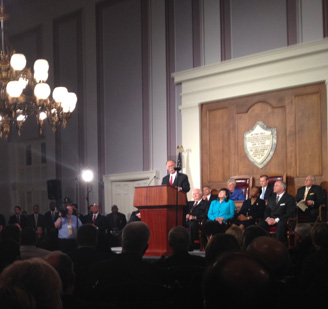 On Tuesday, January 14th popular Alabama Governor Robert Bentley (R) delivered his fourth state of the state address to a joint session of the Alabama legislature.  Understandably the reaction to the conservative Republican’s fourth year agenda was sharply divided along partisan lines.

Speaker of the House Mike Hubbard (R) from Auburn said on Facebook, “As I listen to Governor Bentley give the State of the State address, I think of two things. One, how blessed we are to live in this great state. And two, how thankful I am for the opportunity to serve as your Speaker.”

State Representative Joe Hubbard (D) said on Facebook, “As political sound bites go, the State of the State was a work of art. As a stump speech for a reelection campaign, it lacked only the flatbed truck and midget with a broom. As a roadmap of actual proposals to address the very real issues facing our state, it left much to be desired.”

Alabama Young Republican Chairman Clayton Mark Turner said on Facebook, “Great to hear from the great Governor Robert Bentley at his 4th State of the State address. Alabama is lucky to have a man of such character and conviction leading the Great State of Alabama.”

Republican candidate for Congress, Matt Jenkins, said on Facebook, “We are truly blessed to be represented by a man like Governor Bentley, who since day one has made getting all Alabamians back to work his number one priority. Tonight he pledged to stay the course. But our Governor can’t fight this fight alone.”

House Democratic Minority Leader Craig Ford (D) from Gadsden said in his counter response, “There is a way to get Alabama back on track. If we support our public schools and expand our vocational and workforce development training programs, we can give our workers and future generations the tools they need to get good paying jobs and achieve their dreams. This will also help us recruit more business to Alabama, and help existing businesses expand.  We must also dedicate ourselves to supporting our public schools instead of working against them. We need to treat our educators like professionals, instead of treating them like they are the enemy. We need to repeal the Accountability Act and put our tax dollars back into our schools where they belong.  Alabama is not where we want it to be. But we can get there. I encourage the governor and legislative leaders to use this legislative session as an opportunity to invest in the people of Alabama. We share the same goals. Let’s work together to achieve them.”

Alabama State Senator Bryan Taylor (R) from Prattville said, “Governor Bentley tonight in his State of the State Address made as powerful a case as I’ve heard against expanding Medicaid per ObamaCare. To paraphrase, he explained that adding 300,000 people to the rolls of a flawed, broken government dependency program is like adding more and more people onto an already crowded boat, even while the boat is sinking. It’s nonsense. The way to break the cycle of poverty and dependency is to give every Alabamian educational opportunity and to set a business-friendly climate that attracts jobs to our State. That’s what we’ve been doing since I took office. We have kept the education budget out of proration for three straight years with fiscally responsible and balanced budgets. We have grown funding for education by promoting job growth, not by raising taxes. The graduation rate is now at 80% this year — highest ever — and Alabama’s unemployment rate is the lowest in the South. While there is always more to do, this approach — not putting more people on food stamps, welfare, and Medicaid — is the recipe for prosperity that made this country great.”

Ultimately, this speech and Governor Bentley’s performance over the last four years will be judged by the voters in the November election.