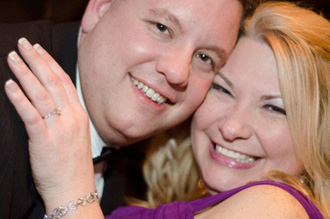 Birmingham—The Producer of a statewide politics show in Alabama takes a knee at the end of this weeks episode as he “pops the question” to his bride-to-be. Jonathan Barbee, producer of “The Voice of Alabama Politics,” planned this surprise engagement weeks in advance.

“It was a feeling I’ve never experienced before. I can’t explain the emotions that were going through me or the rush I was feeling once the plan was in full gear. We had 3 hidden cameras and the best thing is that Joanne had no idea this was coming. She was totally surprised! It’s a good thing she said, ‘Yes!’” jokes Barbee.

Barbee and Sellers met on the stage at the Newt Gingrich Presidential rally in Birmingham on March 13th, 2012. The two have been dating since.

“I am truly a lucky guy. She is wonderful. We make each other happy,” says Barbee.

Here is a clip from “The V” which aired on Sunday, January 19th, 2014. Barbee plans to release the full version of “The Proposal” on YouTube in the coming weeks, which will include footage from the limo ride, behind the scenes, and the full proposal.

Tuesday’s vote by the people leaves the judicial portion of the Constitution like it is now.

An Alabama Law Institute Committee composed of legislators, judges and lawyers met in secret away from the press and public over 19 months conducting...