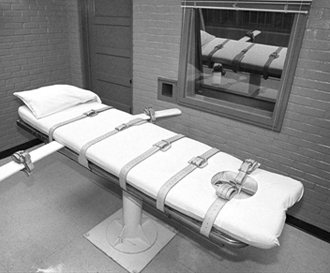 There will be a public hearing today at noon at the State House in Montgomery on proposed legislation, labeled the “Fair Justice Act,” that would speed up death penalty convictions in the state. The hearing will be before a joint session of the House and Senate Judiciary Committees.

The legislation, part of a larger package endorsed by Attorney General Luther Strange, would limit certain “Rule 32” post-conviction appeals to occur concurrently with merit based appeals. AG Strange and others have said that the new regulations would help bring justice to victims’ families:

“I would argue that by handling these appeals in a more expeditious manner is more just,” the Attorney General said in a press conference announcing the package of four criminal justice bills, “we’re not waiting fifteen to twenty years.”

Some say, however, that the “Fair Justice Act” would speed up a process that just doesn’t provide justice. Since late last century, more than a hundred death penalty cases have been overturned because of prior error or innocence. The Equal Justice Initiative has come out against the proposal, as well as many Democrats on Goat Hill.

Sponsors of the Fair Justice Act in the House and the Senate are as follows:

Alabama Political Reporter will be covering the public hearing, and will be recording the proceedings. Video will be available soon after the hearings are over.

As always, you can stay up-to-date by liking us on FB at facebook.com/alreporter or following us on Twitter @alreporter.

Advertisement. Scroll to continue reading.
In this article:Lee Hedgepeth