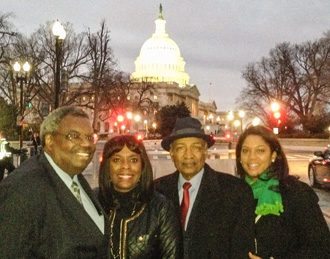 The struggle to get an African-American appointment to a now-vacant seat on the United States Circuit Court of Appeals has now gone even further. Late last week, US House Representative Terri Sewell visited the White House with some special guests to lobby the President for a black appointment to the open seat. With her were Harvard Law School graduate and State Senator Hank Sanders and Dr. Joe Reed, a longtime leader in the Alabama Democratic Party.

In addition to the visit by the three Alabama politicos, forty one members of the United States Congressional Black Caucus signed a letter to the President asking for his close consideration of qualified African-American candidates.

“In Alabama, there are three Federal judicial districts consisting of 14 Judgeships. Two of the 14 Judgeships are vacant, resulting in 12 sitting judges with only one of those being African American,” the letter said.

“To put this issue in greater context, 64 judges have served on Alabama’s District Court bench since districts were first established in 1824. Of this number, only three have been African American. In the 33 years since President Jimmy Carter appointed the first two African American federal judges in Alabama, there have been 26 judicial appointments in the state and only one was African American; your appointment of judge Abdul Kallon in 2009.”

The Alabama Political Reporter earlier reported on the empty vacancy to the court and the rush to find a nominee, focusing on the role of Alabama’s US Senators, Jeff Sessions and Richard Shelby’s role in the process. The Senators possess what is effectively veto power over nominees they find objectionable, due to a tradition of “Senatorial Courtesy” allowing home state legislators to “blue slip” undesirable nominees.

The full article can be read here.

To make it even more difficult, the Alabama Democratic Party has also submitted names of candidates deemed qualified for the judgeship. ADP was in the news frequently last year as the party faced an effective split over intra-party strife, some of which seemed centered around race.

This weekend, the Democratic Party’s governing body, the SDEC, will be meeting in Montgomery, and will be forced to consider a proposed diversity amendment to its by-laws. The amendment, which has been put forward several times before, would guarantee SDEC representation for minorities other than African-Americans, in basic syllogism with the national Democratic Party’s diversity platform. Dr. Joe Reed, Representative Sewell’s guest in DC, has been a longtime opponent of such a change.

The Alabama Political Reporter has not been able identify any federal judges from the Yellowhammer state representing a minority other than African-Americans, although populations such as the Hispanic-Latino demographic are as high a five percent. Representation of black Alabamians, too, though, is disproportionate to their population, specifically in reference to the federal judiciary.

“Mr. President, history has presented you with a unique opportunity,” the CBC’s letter concluded.

“The record reflects the need to aggressively nominate well-qualified African Americans to the federal district court bench in Alabama and across the nation. The names of African American individuals have been submitted to you for consideration and more recommendations can be provided. It is our hope that you will work with the Senate and Members of the House of Representatives to identify nominees who reflect your commitment to diversity and inclusion.”

The last paragraph of the letter is somewhat reminiscent of Hubert Humphrey’s 1948 address to the Democratic Convention, in which he called for the inclusion of civil rights in the platform and caused the walk-out of 35 southern delegates, beginning the “Dixiecrat” revolt:

“My good friends, my fellow Democrats, I ask you for a calm consideration of our historic opportunity. Let us do forget the evil passions and the blindness of the past. In these times of world economic, political, and spiritual — above all spiritual crisis, we cannot and we must not turn from the path so plainly before us. That path has already lead us through many valleys of the shadow of death. And now is the time to recall those who were left on that path of American freedom.”

The first line of Representatives of the CBC’s signatures included the Chair, the Vice Chair, and that of Terri Sewell, Alabama’s lone congressional Democrat and only African-American elected statewide.

The full text of the letter can be read here.