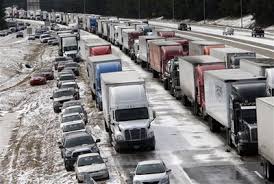 The winter weather that blanketed the State on Tuesday, January 28, 2014 caused crashes and closings across Alabama.  Some of the political leaders of the State were also affected by the unexpected ferocity of the winter weather.

Sixth District Republican Congressional Candidate Gary Palmer said on Facebook, “Ann and I were both caught by the snow-generated traffic jams and could not get home Tuesday night even though I have a 4 wheel drive Ram pickup. She spent the night at Mountain Brook Community, I stayed with Cameron Smith and his family. It wasn’t the snow and ice, it was that practically every street was blocked with wrecked or abandoned cars. It was like a scene from the Walking Dead. I finally found one street open enough to get out yesterday morning and spent the day giving people rides to pick up their school kids, get to their cars, get groceries, and get to their homes. After dark, I parked my pickup and got out my Kawasaki Mule and my neighbor, Darryl White, and I continued to pick up people until after 8pm. I gave everyone my Congressional campaign card. It may have been my best day on the campaign trail.”

State Representative Mack Butler (R) from Rainbow City also got stuck in the winter weather.  Rep. Butler said on Facebook Tuesday, “Just to give a quick update! I still have over 3/4 of a tank of fuel and I’m still stuck in traffic at 65 and 459. I just finished dinner of a candy bar and water! So life is great! Surely we will get moving soon! I am so thankful to be in a warm vehicle, with plenty of fuel! Blessing to all!”  Rep. Butler eventually got home.

Anita Drake, wife of state Representative Dickie Drake (R) from Leeds said on Facebook Wednesday, “Dickie is worn out. He and Heath (the Drake’s son) helped stranded motorists all night. They were able to get people to warming stations from the exits and some from the interstate. They even took some home to Moody, Cook Springs, etc. Heath was coordinating with radio stations. There were still some they could not reach. We prayed hard. I hope there are no fatalities. Snow is beautiful, but we were unprepared. It is so rare here! If anyone is stuck around the Leeds area, there are warming stations open at Cedar Grove Baptist Church and the United Methodist Church, and I will be happy to find out others. Unless you just have to press on, please don’t. If I can help to coordinate anything which was my job last night, please let me know. I am trying to find out about the school children. God bless them and their parents and all the affected people in this time of crisis. It will be over soon. Keep praying and be cautious about your every decision.”

Rep. Allen Farley (R) from McCalla told Mrs. Drake on Facebook, “Anita, You are in a family of First Responders who have been called into the political arena.”  Drake is retired from the U.S. Air Force.

Public Service Commission candidate Jonathan Barbee (R) said on Facebook Wednesday “Unless you have 4 Wheel Drive I would suggest staying off the roads for today. If you do have 4WD please see if you can help your friends and neighbors! We are on a run right now to pick up some people and deliver water.”

Political Consultant Stephen Gordon from Hartselle said, “I’ve noted that several of my FB friends in Birmingham are offering to help stranded people, but don’t know where to go. This FB group is a great starting point, and it has shared Google docs with the locations, medical issues, situation of stranded (and missing) people.”  The rapidly assembled Facebook group helped unite would be rescuers with people trapped in cars who needed rescue.  Numerous Alabamians with four wheel drive vehicles, ATVs, or side by side off road vehicles volunteered to help rescue trapped motorists.  A similar group was also organized in Atlanta where residents endured a similar weather related situation.

Republican political consultant Trey Edwards who participated in Tuesday and Wednesday’s volunteer rescue efforts said on Facebook, “Social Media is a powerful and undervalued tool in Emergency Management! If something as simple as a Google Form can save hundreds of lives, imagine what we could have done with more real resources! Hoping this can start an honest conversation on taking a look at how we see emergency management, possibly rethinking it completely. The power of the cloud is impossible to deny, the only question should be how to use it to bring the most people in at the right time, in the right way.”