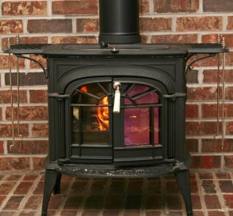 President Barack H. Obama’s (D) war on coal has the potential to cost Alabama coal industry jobs, shutter Alabama Power coal burning power plants, and cost Alabamians more money in higher electricity cost.  But the end of coal burning power plants is not the end of the Obama administration’s extremist energy policy.  Now the President’s Environmental Protection Agency (EPA) has turned the power of the Federal government on Americans who burn wood for winter heat and companies who make the wood stoves that millions of Americans rely on for most or part of their heating needs.

Inexplicably, the EPA has recently banned the production and sale of 80 percent of America’s current wood-burning stoves.  Most wood burning stove users live in rural areas and many of them are poor.  The administration apparently believes that it’s climate change theories justify making some poor family pay more for energy……energy that is likely to become more expensive due to the administration’s stringent policies on American coal.

EPA had previously banned wood burning stoves that didn’t limit fine airborne particulate emissions to 15 micrograms per cubic meter of air.  Now EPA is changing that to a maximum of 12 micrograms.

Senator Davud Vitter (R) from Louisiana wrote: “The collusion between federal bureaucrats and the organizations entering consent agreements under a shroud of secrecy represents the antithesis of a transparent government, and your participation in the FOIA request will help Louisianans understand the process by which these settlements were reached.”  Vitter and Louisiana Attorney General Buddy Caldwell have filed a freedom of information request requesting all correspondence between the Obama Administration and environmental and public interest groups since the President’s inauguration.

The U.S. Chamber of Commerce wrote that Sue and Settle rulemaking have been used by EPA to make, “Most controversial, economically significant regulations that have plagued the business community for the past few years.”  These have included regulations on power plants, refineries, mining operations, cement plants, chemical manufacturers, and other industries.  EPA then passes regulations without any effective congressional oversight based on the consent decrees.  Worse these sue and settle agreements no matter how outrageous are legally binding even if a future administration and a future Congress believes that the terms of the agreement were settled in poor judgment.  Meanwhile the American economy has been growing at a crawl under the weight of these excessive new regulations.

Even though burning wood is the oldest heating method known to humanity, EPA and their friends in the environmental extremist community somehow have come to the conclusion that Americans can not have the freedom to make their own decisions about purchasing and operating a wood stove.