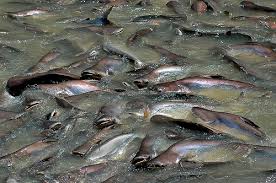 Farm-raised Catfish is big business in Alabama. Farmers in Alabama and Mississippi grow some of the best grain-fed catfish in the world in carefully managed farm ponds across the State. Alabamians have grown up eating this catfish. It is the staple of a Southern diet.

However, when you go to a restaurant in Alabama, the catfish you order may not be an Alabama catfish, and worse, that catfish may not even be a catfish.

While Alabama and Mississippi fish farmers were responsible for inventing most of the farming techniques and technology used today, the world has embraced those techniques and methods to grow their own fish. Thanks to global trade agreements, commercial fish farms in Asia often export their fish back to the United States and Alabama.

Asian farmers have found that the Channel catfish is not the only species that will grow well in a catfish pond. Pangasius, Basa, Tra and Swai are also farmable fish, which scientists do include in the siluriformes order.

Under current U.S. law, if scientists classify a fish as a siluriforme of the family ictaluridae, you can call it a catfish and sell it in the U.S.

In the 18th century, Carl Linnaeus, the Swedish botanist, physician and zoologist, laid the foundations for the modern biological naming scheme known as binomial nomenclature.

For example, humans are classified as the species sapiens, in the genus homo, in the family of hominidae, in the suborder anthripoidea, we are a member of the order primates, our class is mammal, we join the fish, snakes, and birds in the subphylum vertebrates, our phylum is chordates, and we are members of the vast animal kingdom that include cockroaches, spiders, sea horses, oysters, sea cucumbers, and even corals.

Now, if you went to an adoption agency to adopt a child and they sent you a lemur or a spider monkey instead of a human child this would be considered by the courts to be fraud.  Similarly a zoo who purchased a gorilla from another zoo would want to receive a gorilla not an orangutan or a baboon.  All primates after all are not exactly alike or even very similar.

Similarly if I went to a restaurant and ordered chicken and they served me turkey, quail, guinea, partridge or pheasant (all birds scientists classify as members of the order, galliformes) I would think they got the order wrong.

Somehow in the world of the U.S. Food and Drug Administration (FDA) if you hit the right order of fish that was close enough for government work.  Bread it, deep fry it and put enough tartar sauce on it and maybe you won’t taste the difference.

In 2003, Congress passed a law in 2003 preventing the imported Pangasius (a species of Shark catfish) from being labelled as catfish, as well as imposing additional tariffs on the imported fish. Under the U.S. Food and Drug Administration ruling, only species from the family Ictaluridae can be sold as true catfish. As a result, the Vietnamese exporters of this fish now label their products sold in the U.S. as Basa fish or Bocourti. This has not always translated well to our restaurant menus.

While Alabama law can never supersede Federal law, a new proposed law has passed the Alabama Senate Agriculture, Conservation, and Forestry Committee that would require Alabama restaurants to provide menu labels on all fish of the siluriformes order. SB 335 is sponsored by Senator Bobby Singleton (D) from Greensborough. SB 335 would also require country of origin menu labels.

Maybe I would prefer fried Basa from Vietnam over American farm raised catfish at the place across town. But, if so, this law would require that the restaurant tell me whether or not the fish they are serving is American Farm Raised Catfish.

The Alabama Political Reporter attended the public hearing on this legislation on February 26.

The Chairman of the Senate Agriculture, Conservation, and Forestry Committee Tom Whatley (R) from Lee County said that the catfish industry is a multi-million dollar industry in Alabama.

Senator Singleton said, “I am from Western Alabama and catfish has been the livelihood of my people for many years.” Singleton said that in the last year and a half, one of the major plants shut down, taking 250 to 350 jobs with it. We produce a great product, but we are facing foreign infiltration into the market.  As we grow more species of fish are coming into the market. “This is more of a marketing piece of legislation, trying to help the people of West Alabama.”

Chairman Whatley said, “Every committee member has come to me and talked to me about this vote.”

Townsend Kyser said, I am a catfish farmer in Greensborough, Alabama. My family has been raising catfish since 1965. The catfish industry is responsible for 6000 jobs in Alabama, but we have lost 2000 jobs in the last 5 years. This is a $152 million industry, however it has shrunk 50% in the last five years but people are still consuming the same amount of catfish or a similar fish. “All we are asking for is an equal playing field. The U.S. catfish industry provides the safest and most reliable seafood in the world.”

Kyser said that many restaurants in Alabama are selling an unsafe product. We want consumers to know what they are choosing from. We want to be on an equal playing field.

Rick Brown with the Alabama Retail Association said, “We visited this about five years ago and it was a hard fought battle. We agreed to signs…I want to see the catfish industry succeed…They want us to change our menus…All this species stuff I have not been told we have a problem with that.”  Brown said that printing new menus and going out to Kinkos every time a new order of fish came from a different supplier would be an excessive burden on Alabama restaurants. “Y’all are asking us to raise our overhead to help your industry.”

Sen. Shadrack McGill (R) from Woodville asked, “Would the catfish industry agree to pay for the new menus?”

Sen. Singleton said, “I don’t normally speak for the catfish industry, but I’d say no.”

A representative with the Alabama Catfish farmers said, “We will pay for any of the signs and placards for anybody that serves U.S. farm raised catfish.”

Sen. Billy Beasley (D) from Clayton said that he was at a local restaurant and “I was concerned about where the catfish is coming from.” The waiter and the manager said that they had no idea about where the seafood comes from, so he asked to see an invoice.  The invoice said the product comes from Indonesia.

“It does not cost that much to put on the menu where the product comes from.  I am in full support of this bill.”

Sen. Phil Williams (R) from Rainbow City said here is my concern.  We have top of the River and the Fish Market in my district. They may order from one place one day and order from another supplier the next day. If the fish comes from different countries, do they have to get different menus? This could be cutting the knees out from under one industry to help another.

Former State Rep. Jim Barton (R) who is now a registered lobbyist said, “I am from the Gulf Coast where we bring much of the fish in through the port and I have owned a seafood restaurant. If I normally order from brand x and they don’t have what I need, so I call brand y. I don’t have time to print new menus by the time that I start serving lunch at 11:00 am. I took a look at the 35 species of fish. I don’t know what any of these are. It looks like a catfish to me.”  Barton warned that it will impede the ability to do business if you pass this legislation.

Butch Wilson from Dallas County is a fifth generation farmer.  Wilson said, “This is a Food safety and jobs issue.”  Wilson said less than 2% of your fish is inspected at the ports and 92% of your seafood is imported.

Ellie Taylor with the Alabama Grocers Association said, “This bill also impacts the grocery industry in our delis. We wholeheartedly support the Alabama catfish industry.” Taylor said We invite the catfish industry to meet with us,” to find ways to market their product “Instead of overburdening the industry with over regulation. We want to see Alabama products succeed in the market.”

Will Pierce said, “My family have been catfish producers in Dallas County for over 40 years.”  “This is mainly a matter of food safety.”  Hazardous chemicals are often used in farms overseas and less than 1% are tested. “Tainted fish are getting into the food supply.”  Pierce said that the proposed legislation would not prohibit restaurants from selling imported fish we just wanted people to know the country of origin of the fish they are eating.

Sen. Whatley said, “Both sides made great points and appear close to an agreement.”

Sen. Paul Sanford (R) from Huntsville aid, “This doesn’t go along with the spirit of the red tape reduction act.  “I don’t have one piece of evidence in front of me that there is unsafe product on tables here in Alabama.  I do understand that maybe there is not enough testing at the port,” but that is best handled at the federal level.  “If there is unsafe product coming into Alabama nobody on this committee wants to see that happen.”

The committee carried the legislation over for a week on an 8 to 1 vote so that the catfish, retail and restaurant industry representatives could meet on compromise legislation.

Chairman Whatley said, “This is an important issue and hope to bring it up next week.”

Alabama Farmers Federation Catfish Division Director Rick Oates said, “Catfish farming is an important business in Alabama, but our farmers are hurting from foreign competition of inferior catfish-like species that are often marketed as catfish.  Requiring the U.S. farm-raised catfish label will give consumers greater peace of mind in knowing the food they buy meets the nation’s stringent food safety standards. We really appreciate the Alabama Retail Association for working with us on this legislation to ensure it’s beneficial for consumers, farmers and retailers.”