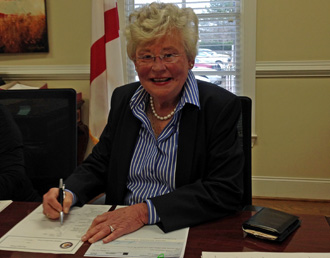 Auburn Conservatives for Tomorrow (ACT) and Young America’s Foundation will host An Evening with Steve Forbes on Friday, March 21, 2014 at the new Auburn Arena. On Wednesday ACT announced that Alabama Lieutenant Governor Kay Ivey (R) will be the Special Guest at the VIP event.

Ivey is an Auburn graduate, a native of Wilcox County and is the first Republican woman in Alabama history to be Lieutenant Governor.  Ivey was also previously elected the state Treasurer.

Steve Forbes will be the speaker at Auburn Conservatives for Tomorrow’s 2nd Annual Spring Conservative Student Conference.  This event is on the campus of Auburn University.  The keynote address event begins at 7:30 pm and is free for students. This is a change from our earlier reporting where we had the keynote address beginning at 7:00 pm.

General Admission tickets will cost $30 a piece and can be purchased at the door.

There will also be a VIP Dinner & Photo Op beginning at 5:30 PM which is closed to the press.

Speakers at the VIP event will include ACT leaders, Lt. Gov. Ivey, and Steve Forbes.

For more information about ACT, to purchase general admission keynote address tickets, or to join ACT visit their website:

Steve Forbes is the Chairman and Editor-in-Chief of Forbes Media.  ‘Forbes’ magazine is the company’s flagship publication and is the nation’s leading business magazine.

Steve Forbes campaigned for the Republican nomination for President in 1996 and 2000.  He is also the author of How Capitalism Will Save Us: Why Free People and Free Markets Are the Best Answer in Today’s Economy.

Mr. Forbes has a bachelor’s degree in History from Princeton University.  He serves on the boards of the Ronald Reagan Presidential Foundation, the Heritage Foundation, and the Foundation for the Defense of Democracies.

The group said in a written statement, “ACT prides ourselves on providing first-class speaking events, for our student members, and members of our community. We bring in big name conservative speakers to excite our students, and to help prepare them to be the next generation of conservative leadership. Don’t miss out! Join Us!”