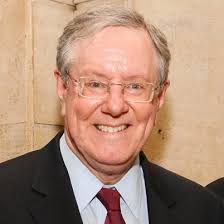 Forbes told reporters that the economy is getting better but it is still not as strong a recovery as it should have been.  The recovery will be stronger because the banking system is starting to make lending available again.  Forbes said that this is the slowest recovery in American history and this is due to uncertainty about healthcare costs caused by Obamacare, more regulations, and Federal Reserve Monetary policy.  This new normal is the new abnormal, but that mistakes in policy can be undone.

Forbes said that this was his first visit Auburn.

Forbes said that change is coming.  The Republicans are probably going to take the Senate and should have taken the presidency in 2014 but huge mistakes were made.  Forbes said that “[Hillary] Clinton will not be a pushover, so there is no room for Republican mistakes in 2016.”

Forbes said in his keynote address, “We are not going to have Obamacare.  Thank God for elections.”  Forbes said that Obamacare is imploding.  “Healthcare is personal.  Washington failed to grasp that.”  With Obamacare Americans are facing catastrophic premiums, high deductibles, and narrow networks. Forbes said that there is a lot of room for real reforms such as national shopping for healthcare insurance.

Mr. Forbes said the nation needs to be moving towards patient centered healthcare.  What we had before Obamacare was a hybrid system developed after World War II where they were 3 parties: the patient, the provider, and the insurance company which pays the bills.  This creates a system where the patient is not the customer.  Forbes said that we will be moving to a system where the patient will truly be in charge.  Forbes predicted that in the future there will be more walk in clinics, health savings accounts and more nurse practitioners.  Forbes said that 80% of the time that healthcare is needed a physician is not needed.  There will be more free market reforms and a more effective safety net, “Just don’t get sick in the next three years.”

Forbes warned that President Obama’s foreign policy and the global perception of his weakness could lead to more unexpected crises.  “The idea of a major European nation invading another European nation was unthinkable at the beginning of the year.”

Forbes says that he still favors a flat tax and believes that there is momentum moving toward a major reform of the tax system.  Forbes favors a system where there are no taxes on the first $40,000 of income and then 17% on everything after that with a 0% tax rate on capital gains and no death tax.  Forbes said that simplifying the tax code will make it easier to calculate and will lead to more collections.  Forbes called the current tax code a plaything for lobbyists in Washington.  Forbes said that there are over nine million words in the tax code and nobody really knows what is in it.  One of the reasons why families need two incomes today is to pay all the taxes.

Forbes also predicted a return to a gold standard and criticized U.S. monetary policy.  Forbes said, “The housing bubble wound not have happened if we hadn’t messed with the money.” Forbes said that the Federal Reserve pumping money into the economy through quantitative easing has led to nothing but making it easier for the federal government to borrow money.

Forbes said that his new book will be coming out on June 6th, but that it is possible to pre-order the book now.
Steve Forbes is the Chairman and Editor-in-Chief of Forbes Media.  ‘Forbes’ magazine is the company’s flagship publication and is the nation’s leading business magazine.  Forbes’ company maintains a vast web presence that includes the popular political news site: realclearpolitics.com.

Steve Forbes campaigned for the Republican nomination for President in 1996 and 2000.  He is also the author of How Capitalism Will Save Us: Why Free People and Free Markets Are the Best Answer in Today’s Economy.

Mr. Forbes has a bachelor’s degree in History from Princeton University.  He serves on the boards of the Ronald Reagan Presidential Foundation, the Heritage Foundation, and the Foundation for the Defense of Democracies.

ACT said in a written statement, “ACT prides ourselves on providing first-class speaking events, for our student members, and members of our community. We bring in big name conservative speakers to excite our students, and to help prepare them to be the next generation of conservative leadership. Don’t miss out! Join Us!”

Alabama Lieutenant Governor Kay Ivey (R) spoke to the group at the VIP dinner event.  Ivey is an Auburn graduate, a native of Wilcox County and is the first Republican woman in Alabama history to be Lieutenant Governor.  Ivey was also previously elected the state Treasurer.

The constitutional amendment would allow judges to deny bail to some defendants accused of violent crimes.