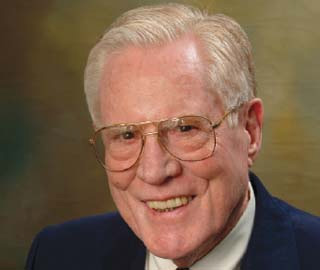 Official McDowell Lee Obituary
Alabama lost one of its finest sons with the passing of Charles McDowell Lee, Sr., at his home in Auburn April 17, 2014.  “Mac”, as he was known by those who knew him, died peacefully with family at his side after a brief illness.  He had been a renowned public servant having served as Secretary of the Alabama Senate from 1963 to 2011.   Before that he had served in the Alabama House of Representatives from 1954 to 1962 where he became the third generation of his family to serve in the Alabama Legislature, a commitment to his civic duty that he took very seriously and was very proud of.

He graduated from Barbour County High School in Clio in 1942, and entered the Alabama Polytechnic Institute (Auburn University) that same year.  At Auburn, he served as a member of the Student Senate and as manager on the football team.  In February, 1943, he left Auburn to enlist in the United States Navy.  He served in both the European and Pacific Theaters of Operation in World War II and was honorably discharged in 1946.  Upon his return to civilian life, he entered the Troy State Teachers College (Troy University), from which he graduated with a degree in education.  While at Troy, he was a member of Kappa Delta Pi Honor Society and, later, the Omicron Delta Kappa Honor Society.  In 1948, he was elected as Mayor of Clio, Alabama and became the youngest mayor in the nation.  He served as mayor for two years before resigning to become a Special Agent of the Federal Bureau of Investigation, where he worked for two years before returning to Clio to administer the family businesses.

In 1954 he was elected to the Alabama House of Representatives where he served eight years during which time he was chosen by the Alabama Press Association as “Outstanding Freshman” Representative in 1955, and chosen as “Best Debater” in 1959.

In 1963 he was elected as Secretary of the Alabama Senate, a position he held for 47 years over the span of 10 governors before retiring in 2011, making him the longest serving Senate Secretary in the nation, as well as the longest serving in Alabama history.   During that time he became one of the leading parliamentarians in the nation exemplified by the extensive involvement in national and regional legislative organizations.  He served as Treasurer of the American Society of Legislative Clerks & Secretaries from 1973-1974 and President from 1974 to 1975.  He received the John A. Beek Award for distinguished service for to legislative history, he served on the Executive Committee of the National Conference of State Legislature and was Staff Vice President from 1976 to 1977.  He has written several articles on the legislative process in Alabama and coauthored two books, The Role of the Senate in Alabama History andGeorge Corley Wallace:  A Legislative Legacy.  In 2006, Mr. Lee was selected by a vote of the faculty of the Department of Political Science of the University of Alabama to be a member of the Department of Political Science Leadership Board, in recognition of his contributions to public service in Alabama.  For over twenty years, he served on the National Conference of State Legislatures Revision Commission of Mason’s Manual of Legislative Procedure, the primary source of rules and procedures utilized by most state legislatures.

Nationally recognized as an authority on parliamentary law and legislative procedure, “Mac” spoke extensively on these subjects and was a respected advisor to the National Conference of State Legislatures, the American Society of Legislative Clerks & Secretaries, as well as the officers of various state legislatures.  In 2000, the Alabama Legislature, in conjunction with the City of Montgomery, named the street which runs along the north side of the State House, “McDowell Lee Lane”.    He was honored for his 47 years of service as Secretary of the Alabama Senate with a Bronze sculpture and portrait that sit in the Senate Chambers.