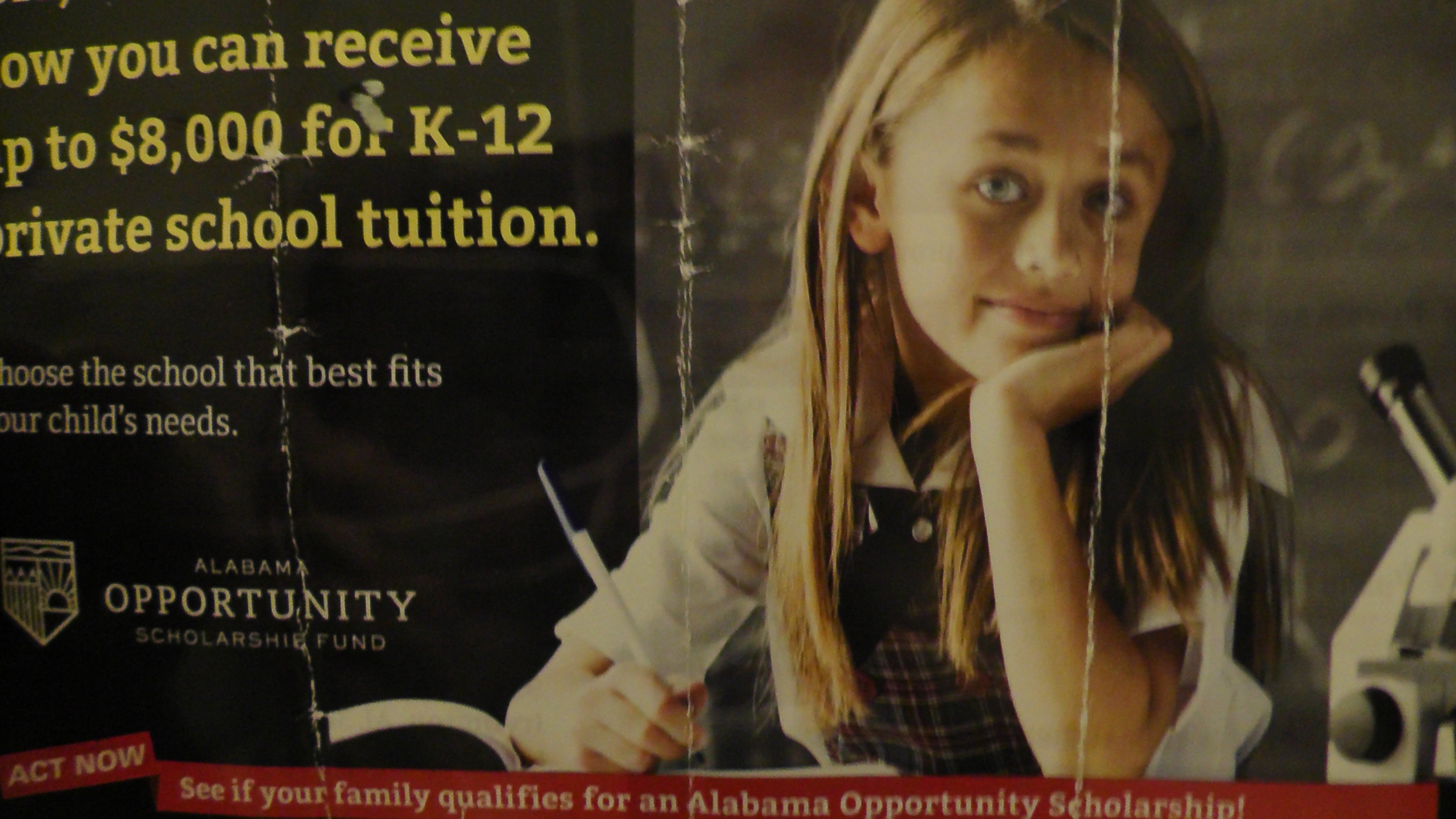 By Lee Hedgepeth
Alabama Political Reporter
“Now you can receive up to $8,000 for K-12 private school education.”
That is the assertion made on the front of a direct mail piece being promulgated by the Alabama Opportunities Scholarship Fund, an Alabama Accountability Act Scholarship Granting Organization. No mention is made anywhere on the mailer of the fact that children zoned for failing schools receive the scholarships first, but after those requirements have been met, parents meet the requirements may also apply for a scholarship to transfer their child from a non-failing school system, which failing systems were touted as the point of the 2011 so-called “school choice” legislation.
In addition, the mailers are being sent out by the organization, not to failing school districts, but to many broad areas across the State.
This particular scholarship organization, or SGO as they have become known, was started by former Governor Bob Riley in cooperation with Florida venture capitalist John Kirtley, whose company has made millions off a similar “school choice” program in the Sunshine State. Under Florida’s law, 3 percent of overall contributions to SGOs (which are tax deductible) go to the SGO as an “administrative fee,” regardless of actual implementation costs; in Alabama, the fee is 5 percent.
After having received a copy of a mailer sent to a reader in Mobile County in a non-failing district, the Alabama Political Reporter began investigating.
Using the personalized link printed on the mailer, our reader allowed us to put in their general information to the SGO’s website to determine scholarship eligibility. The flyer and the website explained eligibility would be based on income alone – not on the standing of the public school for which any students would be zoned as the Alabama Accountability Act actually specifies.
“You could qualify if you meet scholarship income guidelines,” the mailer said.
Having entered the requested information – including reentering the address to which the mailer had been sent – we received an email letting us know that they had preliminarily determined that the children at the household would be eligible for the scholarships, again completely disregarding the fact that the nearest failing school was over a dozen miles away.
“Based on the information you submitted, it appears that your family may qualify for an Alabama Opportunity Scholarship,” the message said.
It is unclear what good sending the mailers to those outside failing districts would do for Riley’s SGO. Many theories seem plausible. Such mailers give Riley’s SGO an opportunity to tout their program and gain a possible funding base. It also promotes the idea of “school choice,” touting $8,000 for parents who choose a transfer or private school. Another possibility is “using” parents as political tools by rallying them around the issue, as John Kirtley pointed out in a video leaked online.
“…That allowed us to use those parents as a political force… We used those parents,” Kirtley says, specifically emphasizing minority families.
Overall though, it seems the mailers may point to something much less meaningful: Riley’s SGO has very, very bad targeting.
In this article: