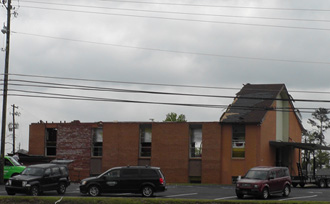 Governor Bentley visited the city of Kimberly on Wednesday to tour extensive damage left by this week’s severe weather, including a tornado that ravaged the town – ripping the roof off of the Kimberly Church of God and nearly completely leveling the city’s fire department. He was met at his arrival by GOP candidate for Lieutenant Governor Stan Cooke, who has pastored the church for ten years.

Cooke, who is running against incumbent Lt. Gov Kay Ivey, showed the Governor the damage at the church. Kimberly Church of God consisted of two main buildings, the older of which will likely be a complete loss due to the removal of its roof. The other building – the main sanctuary – suffered extensive water damage and some mostly superficial damage to its exterior; a structural engineer was on site to asses the feasibility of renovation as opposed to rebuilding the latter building.

Bentley and Cooke went through the remnants of the older church building’s roof, which had been lifted up and dropped right next to the structure’s foundation by the EF1 tornado. Stained glass and debris were littered around the site, though much had already been removed by volunteers.

After assessing the church’s partial destruction, Governor Bentley and Cooke addressed the media, including CNN International and all local major news networks, including Alabama Political Reporter.

“We’re in Kimberly today at Kimberly Church of God and Stan Cooke is our pastor here and he’s been a friend of mine for a long time,” Governor Bentley said.

“So we’re glad to be here with the people in Kimberly. We’re sorry to see all the destruction, but we’ll rejoice in the fact that no lives were lost here. That’s the most important thing. You can always replace buildings – you can always replace structures, but you can’t replace people,” he said.

Bentley also pointed out the need to further efforts to make sure citizens have a storm shelter somewhere nearby, and that they use them. Kimberly Church of God, in fact, has been used as a shelter, with over a dozen individuals, including the children’s minister, having hunkered down in the main building’s basement. After the storm had passed, those in the basement attempted to leave and found themselves somewhat stuck – the tornado had wedged the exit doors shut. Having unsuccessfully attempted to break windows, a few members of the group were able to break the door off the hinges; no one was injured, however, despite the other church building being completely demolished just a few yards away.

Bentley declared a state of emergency for all Alabama counties in response to the extreme weather damage, and written to President Obama requested a federal state of emergency be declared for out state. Alabama’s US congressional delegation has sent a letter to Obama supporting the Governor’s efforts.

Stan Cooke said that he is optimistic that the community will rebound given all the support pouring out from around the state and country, though it will be a lengthy process. He has said that the church was insured fully, and that it will be able to rebuild. Cooke is already making necessary arrangements to hold church services next weekend outside the damaged church.

“I tell my congregation all the time,” Cooke said, “the church isn’t the building, it’s the people.”