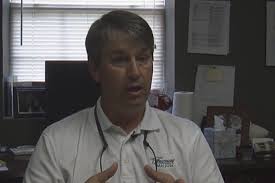 ENTERPRISE – While on his “Road to Economic Recovery” Tour, Governor Robert Bentley made a stop at Po Folks Restaurant in Coffee County at the end of last week. Among those in attendance was Alabama House Representative Barry Moore, who has been indicted on felony perjury charges and is currently out on bail.

Rep. Moore, R-Enterprise, even sat next to the Governor, and was photographed by the press, though they were at a table packed with about a dozen people.

Many present at the event said the press waited for the right moment to catch Moore with Bentley together.
One individual who asked not to be named, said that Moore did everything he could to elbow his way next to the Governor and that Moore’s advisers had encouraged the bogus photo op.

When asked about the visit, the Governor’s Office said that he and Rep. Moore spoke about economic issues in Coffee County and that the subject of the criminal charges never came up. Ironically, the charges Moore is facing relate specifically to Coffee County.

The Lee County Special Grand Jury that has been convened for nearly a year now indicted Moore towards the end of April of four felony counts – two for perjury and two for misleading investigators – in relation to a conversation Moore had with his GOP primary opponent Joshua Pipkin. In that conversation, Representative Moore relays threats to Pipkin made by Speaker Mike Hubbard – threats saying that unless Pipkin dropped out of the race, 100 new jobs planned for Enterprise would be cut.

Moore, in turn, lied about the conversation (which was taped by Pipkin and released by the Alabama Political Reporter), telling investigators that he had not relayed any threats on the part of Hubbard, including threats to Pipkin about jobs in Coffee County and his primary candidacy.

To be clear, Governor Bentley has in no way been implicated in the Lee County investigation.

Rep. Moore has denied the charges. His lawyer, former Lt. Gov. Bill Baxley, has said that the prosecution is politically motivated, aimed at influencing the June 3 GOP primary.

Though Hubbard and Moore have both released these statements and others making these claims, citing in particular “liberal special interests,” the prosecution and public corruption investigation is being conducted by the Attorney General’s Office, currently occupied by a Republican, AG Luther Strange. Hubbard, to his credit, has made veiled attacks at Strange himself, claiming that some in the GOP with hopes to off any 2014 gubernatorial bid on his behalf are attacking him.

In reference to the Moore-Pipkin conversation and the allegations surrounding it re: the jobs in Coffee County, Hubbard recently told Alabama Media Group’s John Archibald that he did have a strong desire to protect GOP incumbents, including Moore.

“Do we do any type of bluffing? Sure,” Hubbard told Archibald. “that goes on all the time in politics. You say all kinds of stuff to get people not to run against you… When you are in a firefight, you know the people in the foxhole with you. If I didn’t support my guys I think I would be a pretty lousy speaker.”

The Lee County Grand Jury is set to reconvene next week, May 13-16.