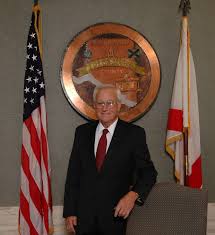 ATHENS— Campaign finance reports show Limestone County Commission Chairman Stanley Menefee received more than $6,700 in “non-itemized” cash contributions in his most recent reporting. The Alabama Fair Campaigns and Practices Act (FCPA) requires all contributions from a single source that exceed $100 to be itemized and reported.

Menefee had also previously reported more than $3,000 in “non-itemized” cash contributions in March. Menefee has reported just five itemized contributions during his campaign, the largest of which reported as $500.

While the mystery contributions in Menefee’s reporting present one potential problem for the incumbent, other errors in his reports could add more questions about the legality of his campaign.

According to the Alabama Fair Campaign Practices Act, a candidate not using the Secretary of State’s online system for reporting must themselves sign their reports. Menfee has never signed the reports himself.

In addition to the mystery contributions, Menefee has also reported mystery expenses. On February 3, he reported a $750 expense to an unnamed consultant.

“Campaign finance disclosure laws are an essential part of an open and honest government” and that “When these laws are disregarded and broken, the integrity of our government is threatened. The Office of Attorney General is committed to investigating and prosecuting such violations and to protecting our citizen’s trust in the integrity of their public representatives.”

Menefee was elected as chairman of the Limestone County Commission in 2010 as a Republican. He had previously served as chairman and commissioner as a Democrat before switching parties in 2010.

Menefee is being challenged by Republican businessman Mark Yarbrough in the June 3, 2014 Republican Primary.

(a) Each principal campaign committee or political action committee shall file with the Secretary of State or judge of probate, as designated in Section 17-5-9, reports of contributions and expenditures at the following times in any year in which an election is held:

(1) Between 50 and 45 days before and between 10 and five days before the date of any election for which a political action committee or principal campaign committee receives contributions or makes expenditures with a view toward influencing such election’s result.

(2) Provided, however, that with regard to a runoff election a report shall not be required except between five and 10 days before the runoff election.

(b) Each principal campaign committee, political action committee, and elected state and local official covered under the provisions of this chapter, shall annually file with the Secretary of State or judge of probate, as designated in Section 17-5-9, reports of contributions and expenditures made during that year. The annual reports required under this subsection shall be made on or before January 31 of the succeeding year.

(c) Each report under this section shall disclose:

(3) The total amount of other contributions received during the calendar year but not reported under subdivision (c)(2) of this section.

(5) The total amount of receipts from any other source during such calendar year.

(6) The grand total of all receipts by or for such committee during the calendar year.

(7) The identification of each person to whom expenditures have been made by or on behalf of such committee or elected official within the calendar year in an aggregate amount greater than one hundred dollars ($100), the amount, date, and purpose of each such expenditure, and, if applicable, the designation of each constitutional amendment or other proposition with respect to which an expenditure was made.

(8) The identification of each person to whom an expenditure for personal services, salaries, and reimbursed expenses greater than one hundred dollars ($100) has been made, and which is not otherwise reported or exempted from the provisions of this chapter, including the amount, date, and purpose of such expenditure.

(9) The grand total of all expenditures made by such committee or elected official during the calendar year.

(10) The amount and nature of debts and obligations owed by or to the committee or elected official, together with a statement as to the circumstances and conditions under which any such debt or obligation was extinguished and the consideration therefor.

(d) Each report required by this section shall be signed and filed by the elected official or on behalf of the political action committee by its chair or treasurer and, if filed on behalf of a principal campaign committee, by the candidate represented by such committee. There shall be attached to each such report an affidavit subscribed and sworn to by the official or chair or treasurer and, if filed by a principal campaign committee, the candidate represented by such committee, setting forth in substance that such report is to the best of his or her knowledge and belief in all respects true and complete, and, if made by a candidate, that he or she has not received any contributions or made any expenditures which are not set forth and covered by such report.