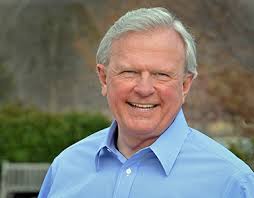 HUNTSVILLE—Just hours after the Alabama Political Reporter released a report in which House Ways & Means Chair Steve Clouse, R-Ozark, broke with the Bentley Administration on expanding Medicaid under the ACA better known as Obamacare, gubernatorial candidate, Parker Griffith, released a scathing assault on Bentley and the ALGOP leadership.

“Steve Clouse knows the Alabama budget better than almost anyone and for him to break with Governor Bentley and agree with my position is the first crack in the castle wall around Bentley. Today, Chairman Clouse has said, in effect, ‘Emperor Bentley has no clothes.’”

Griffith, who 24 hours earlier had launched a statewide tour to explain his vision, “to reform, retool and expand Medicaid,” sees the Clouse revelation as a testament to his own efforts. The release said that Clouse had, “ceded to pressure from the voters and the reality of the economic numbers. Clouse now admits that reforming and expanding Medicaid would be an economic boon to the State.”

Griffith, who is a physician, has made the expansion of healthcare for Alabama a central theme of his bid for the Governor’s office.

He was unsparing in his criticism of the State’s popular Governor throwing down the gauntlet, “Bentley can run but he can’t hide. I demand that Governor Bentley join me in a debate about reforming, retooling and expanding Medicaid in Alabama. The people of Alabama deserve to hear from the governor himself on this issue especially now that leaders in his own party are abandoning his indefensible position.”

Highlights of Griffith’s plan include more than 30,000 new jobs, a $2.1 billion boost to the Alabama economy every year, healthcare coverage for at least 191,000 uninsured Alabamians, and as many as 500 lives saved every year. SEE PLAN