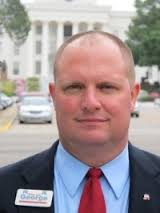 Stacy Lee George refused to engage in any of the customary personal attacks.  In fact George said of incumbent Republican Governor Dr. Robert Bentley, “I am running against a very fine man.”  George said however that the two are, “Totally opposite on many issues.”

The biggest of these is gambling.

George also vowed to fight corruption if he is elected Governor.  George said, “I am not scared of Republicans or Democrats.”

George is also running on a platform that Alabama needs more average citizens elected.  “I made 38,000 last year,” George told the Jefferson County Republican Party.  George is a corrections officer.

On his Facebook page, George said, “When one person thinks out of the box and has a vision they call him crazy. When two people think out of the box and have a vision they call them two crazy people. When 3 people think out of the box and have a vision they call that A MOVEMENT….. I have a vision that too many Doctors, Lawyers, and Businessmen have run this state for too long. We all appreciate these people but, the rest of us need representation too. We need to elect people who feel what we feel and the top 3 percent of wealthy people in Alabama do not feel what we do. If you want something NEW then you have this opportunity. Let George do it for Governor and middle income Alabama wins. Do not let anyone tell you we cannot win because, that is what they told Dr. Bentley 4 yrs. ago and he won. If a Rich Doctor can win then a working man has a chance too…If we get 3 likes we have a movement that says we are all tired of Politics as usual….”

Despite his spirited speech, which at one point involved he and his son tossing the Frisbee on stage, Bentley was still the overwhelming winner in the straw poll vote with Bentley carrying 80% of the vote.