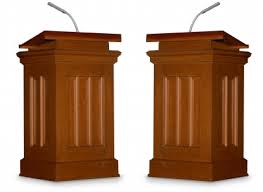 Secretary of State Jim Bennett (R) is predicting that only 5 percent of the Alabama electorate will vote on Tuesday, July 15.  Ironically, the office he is currently vacating is the most prominent statewide office on the Tuesday ballot and probably the race where the two candidates have fought the longest and the hardest.  State Representative John Merrill and former Montgomery Reese McKinney have traveled from one end of the State to another to speak to groups to appeal for their support in the Alabama Secretary of State’s race.  This contest continued on Thursday, July 10 in Hoover.

Both candidates promised forum moderator Apryl Marie Fogel (the State director of 60 Plus) that they would looking into elimination of the business privilege tax.  Fogel said, “It is not a privilege in this nation to have a business.”

Judge Reese McKinney suggested that like a lot of the taxes it might cost more money to collect than it generates in income.

Representative Merrill emphasized his record in what he called, “The most conservative legislature in the history of Alabama.”

Rep. Merrill said that he would support and encourage the legislature to pass party registration.  Merrill said this session he introduced a bill to do that but it just did not have the support in the legislature needed for it to make it out of the full committee, however, “Because of recent developments there have been some changes,” (alluding to the debacle in the GOP runoff in Mississippi where the incumbent used a late appeal to Democrats to win nomination for another term in the U.S. Senate.

Merrill in response to a question from Ms. Fogel said that the Secretary of State’s office has 44 employees and only two of them are non-merit.  “I do know that it is possible to reduce the size of the office.”  Merrill did promise to take inventory and study how the office can do it’s work more efficiently.

McKinney said that if elected, “The first thing I would do is evaluate every position.”

Rep. Merrill said we have already reduced the size of State government by over a $billion a year.

McKinney said that as Secretary of State he would evaluate the whole election process and if they find anywhere evidence of voter fraud that will pursue it and that he is the only candidate with the experience and the track record to do it.  Early on as probate judge employees showed Judge McKinney a stack of absentee ballots that all had the same distinctive handwriting in the signatures.  McKinney said, “I insisted that we call a grand jury into session.”  The whole matter was thoroughly investigated and several persons were called before the grand jury.  There was not enough evidence to convict but that never happened again.

Rep. John Merrill said that when you go to the polls on Tuesday you will have to show photo id and that is because of legislation that we passed in this legislature.  “I am the only person in this race that has done something to fight voter fraud.”  If voter fraud is found he will make sure that it is prosecuted to the fullest extent of the law.

Merrill said that photo ID won’t be repealed while this legislature is in session.

McKinney said that we need to forge a partnership with the registrars and he is the only candidate standing up here who has ever run an election.  Fighting voter fraud requires a team effort.

Merrill said that the Secretary of State is the only person who can remove a member of board of registrars.  Voter fraud can be performed by the probate judge, the sheriff, a mayor, or member of the city council.  When there was evidence that some polling places in Alabama may have been committing voter fraud, “Glen Browder in 1988 sent a team to those areas.  A lot of those irregularities were corrected immediately.”

Merrill said that while he declined each and every raise he was offered in Montgomery, his opponent (Judge McKinney) accepted each and every one of the nine pay raises he was offered while in office.  Merrill said that while he was in the legislature he cut state spending and bureaucracy by more than $one billion.  “My opponent increased his budget more than one million in the fourteen years he was in office.  It has been my honor to be a member of the Alabama legislature, part of a team that has changed Alabama state government in a way that has never been done before.”

McKinney objected to comparing a part time job to a full time job.  Judge McKinney said, “This man has no idea what he is talking about (referring to Merrill).”  “I want to be your secretary of state.”  “I am the only candidate who has actually managed elections.”