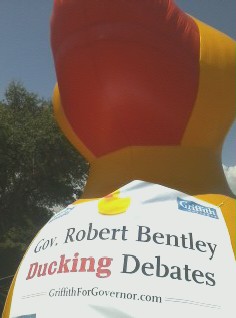 ORANGE BEACH – Candidates for Alabama’s highest elected offices met yesterday at Perdido Beach Resort for the first, and so far, only candidate forum this election cycle. The event was held at the annual convention of the Association of County Commissioners of Alabama on Thursday in Orange Beach.

Speaking for twenty minutes each with no interaction or debate, candidates from both parties for Alabama Governor, Lieutenant Governor, and Attorney General took the stage in turn, beginning with the gubernatorial candidates.

Speaking first, Dr. Parker Griffith, the Democratic nominee for Governor, delivered an articulate and impassioned – but apathetically received – indictment of Alabama’s incumbent Governor Robert Bentley. Griffith labeled Bentley’s administration “aimless,” going as far as to say that if Alabama were an African country, many would be tempted to call it a “failed state.”

Dr. Griffith voiced his support for medicaid expansion, calling it a “no brainer,” criticizing Bentley for not expanding the program. Griffith did point out that he voted against Obamacare in Congress, however, saying that despite that, some provisions of the law have helped Alabamians.

The Democrat also criticized the Governor for his silence on the Lee County Grand Jury investigation surrounding Speaker of the House Mike Hubbard, a theme that reemerged with comments by Joe Hubbard later in the day.

At one point, Griffith implied that the Bentley campaign had “changed its mind” about the format for the Orange Beach forum, opting out of a debate at the last minute. The President of the ACCA, however, said the forum format has always been the same, allowing no debate and only twenty minutes per candidate.

Griffith has challenged Bentley to a series of seven debates in Alabama’s largest cities, but at least until now, the Governor has refused. In fact, the Griffith campaign had a 20 foot tall inflatable duck planted outside the resort where the forum took place – plastered with a poster: “Gov, Bentley’s Ducking the Debates.”

Going second, Republican Governor Robert Bentley’s address to the convention was not nearly as fiery as that of Griffith, the incumbent seemed to have formed a relationship with those in the audience, allowing for a more realistic connection.

Bentley began by saying he’s announced more than 60,000 “new, future jobs,” pointing to new manufacturing facilities in Wilcox County, the new Remington move, and the like.

The Governor then shifted to a discussion of the unemployment rate in the state. For the last to months, Alabama has had the only increase in unemployment nationwide, a statistic Bentley seemed to address in a roundabout way, telling the crowd that while unemployment goes up and down, the state has seen year over year job growth, not lost jobs, from July 2013 to July 2014, for example.

Bentley also touted beginning what he has said will be the “largest road and bridges program” in State history, and being what other State leaders call “the natural disaster Governor.”

Many heads cocked, however, when Bentley made the comment, “Y’all already know me. I don’t need to campaign.” Things got more routine when he said, “I get up and I work hard, and I don’t take a penny for it.”

While it may have sounded harsh to the ears, it seems true. Despite the haphazard speech, Gov. Bentley received the longest applause of any candidate, even receiving a short standing ovation from some.

Bentley’s comments can be seen in full here.

The Alabama Political Reporter will be uploading full comments by candidates for Lt. Gov and AG over the weekend. Check back on Monday for full updates.