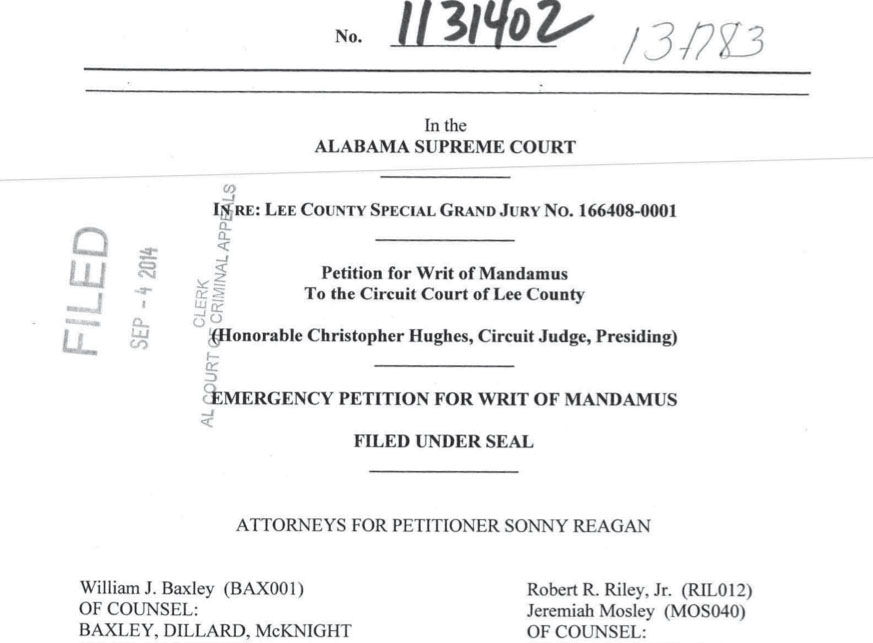 While it is unclear from the pleadings publicly available at the time this article was published, it is assumed that the order denying Sonny Reagan’s petition was issued by the Court of Criminal Appeals.

Reagan was represented before the The Lee County Circuit Court and later before an Alabama higher court by Bill Baxley and Rob Riley, the son of former Gov. Bob Riley. Baxley also represents indicted Republican lawmaker State Rep. Barry Moore.  Baxley is on record as the attorney getting paid by Hubbard to represent Moore.

So, it is, that Reagan’s attorneys are friends of Hubbard as well as one being the son of Riley.

Reagan served as Riley’s Chief Legal Advisor during the crusaded against electronic bingo in the State. Riley recruited Reagan to be point man on litigation against Milton McGregor and VictoryLand Casino. After Riley left office, Reagan returned to the Attorney General’s Office where he has served as the chief prosecutor in gaming cases. In the last two weeks, Reagan argued against McGregor and VictoryLand Casino, before Montgomery County Circuit Court Judge William Shashy.

The court rejected Reagan’s writ against his Lee County testimony, at which time Reagan sought to have the court documents sealed from the public. The court denied Reagan’s request and unsealed the documents on Wednesday.

In his petition, Reagan challenged the validity of a subpoena he was served as well as the Grand Jury itself. He also argued the Grand Jury was illegally convened and is being illegally operated. Reagan sided against his boss Attorney General Luther Strange and with Baxley and Moore in saying that Strange did not have the right to appoint W. Van Davis to act on the AG’s behalf in the Lee County Grand Jury (This was the argument put forward by Baxley in the Moore case which was rejected by Lee Country Circuit Court Judge Jacob A.Walker III and an Alabama upper court).

The court also, once again found that Strange did have the authority to appoint Davis and that that Grand Jury is legal.

Also in the petition, Reagan argued that Hart was retaliating against him because he had filed a “personnel complaint” with Charla G. Doucet, Chief of the Attorney General’s administrative division. These types of complaints are the first steps in an administrative process which could see Hart reassigned or fired from his position as Chief of the White Collar Crimes Division. In his complaint to the AG, Reagan asked that Hart be reassigned.

In August, Alabama Political Reporter reveled that sources from both within and outside of the Attorney General’s Office had confirmed that Luther Strange’s Chief Deputy, Kevin Turner, was orchestrating a plot to remove chief prosecutor Matt Hart from the Lee Country Grand Jury investigation. A plan was devised to have  a “personnel compliant”  lodged against Hart. Reagan it appears was the instrument used to deliver the coup de grâce, against Hart.

Lee County Circuit Court, Judge Christopher Hughes, presided over the hearing for Reagan’s first petition and denied Reagan’s motions as well as an oral motion to stay pending appeal, and Reagan was forced to testify before the Grand Jury.

Reagan through his attorneys Riley and Baxley, then asked the Court that Reagan’s testimony before the Grand Jury be stricken from consideration or, compel the trial court to disband the Lee County Grand Jury therefore nullifying Reagan’s testimony. These requests were rejected by the court.

According to the court documents presented by Riley and Baxley over the past several months, Reagan and Hart were engaged in an interoffice dispute not related to the Lee County Grand Jury.

On July 22, 2014, Reagan sent a formal complaint against Hart for misconduct and requested that Hart be transferred to another office.

Basis for complaint was the fact that Hart had threatened to subpoena Reagan to testify in front of the Lee County Grand Jury if he failed to acquiesce to Hart in the interoffice dispute involving office space and location. However, evidence present in camera before Judge Hughes and the Court showed that the so-called “interoffice dispute” had nothing to do with Reagan’s being subpoenaed.

All accusations were rejected by Lee County Circuit Court, Judge Hughes and an Alabama upper court.

Judge Hughes denied Reagan petition after hearing in camera evidence that show that Reagan had not been subpoenaed to testify in Lee County because of an “interoffice dispute.”

When Reagan finally testified before the Lee County Grand Jury, he invoked his 5th Amendment right.

While recognizing that Strange had recused himself from the Lee County proceedings the court ruled that Strange was to be informed about Reagan’s actions. The court made clear that the Attorney General had a mole inside his organization.