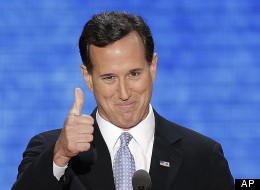 Santorum will be the featured guests at two fundraisers on Thursday, October 9 in Birmingham. On Wednesday, October 1 the conservative group, Patriot Voices PAC, emailed invitations from Santorum.

Sen. Santorum wrote, “I’d like to invite you to join me at a Luncheon Fundraiser for Patriot Voices PAC to support our efforts to elect a Republican majority in the U.S. Senate! I’ll be joined by Gary Palmer, the Republican Nominee for Congress from Alabama’s 6th District.”

That event will be Thursday, October 9, 2014. The VIP Reception will be from 12-12:30 and will be followed by the luncheon from 12:30-1:30 at the Summit Club at 1901 6th Avenue North, Birmingham, Alabama. Cost to attend the luncheon is $1000. Cost to attend both the luncheon and a VIP reception for Santorum and Palmer is $5000. Patriot Voices PAC is raising money so that they can help Republican candidates in the U.S. Senate (which has been in Democratic Party control since 2006).

Later that evening Santorum will be joining the Jefferson County Republican Party at the Fish Market Restaurant at 612 22nd Street South, Birmingham, Alabama from 5:30 PM to 8:00 PM.

The cost to attend is $50. VIPs for $100 also get their picture taken with Santorum.

Senator Santorum said then, “I am pleased to announce our endorsement of Gary Palmer for Congress. Gary has been at the forefront of the battle for our conservatives ideals not just in Alabama but across the country. His leadership at the Alabama Policy Institute has provided solutions for some of our country’s biggest challenges from economic and tax issues, to reducing the size of government and to keeping our families strong…Gary has spent much of his career fighting to preserve our Constitutional rights, and I know he will take that commitment to our nation’s capital. He is devoted to ensuring the American dream is alive and well for future generations. I look forward to fighting alongside him in the weeks and months to come.”

Senator Santorum is presently the chairman of Patriot Voices and the author of “Blue Collar Conservatives.” Santorum finished second behind eventual Republican nominee, former Massachusetts Governor Mitt Romney and some speculate that the socially conservative Santorum might be a potential 2016 Republican Presidential contender.

Senator Santorum has previously attended a GOP event in Tuscumbia. Republicans hope that they can pick up seats in the state legislature this November by turning seats in the Shoals area. Jefferson County is a major point of concern for Republicans. Where Republicans dominated much of the state in 2010 and 2012, Democrats unseated numerous Republican Judges and other office holders as the state’s largest county has turned much more Democratic aligned since 2008.

More possible Presidential contenders will come through the State over the next 17 months since Alabama is relatively early in the primary process in 2016.

The Legislature will return to Montgomery on Tuesday, April 6, for day 19 of the session.