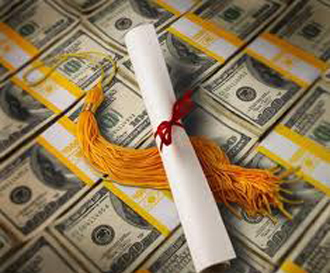 How to pay for college is one of the most vexing issues facing American families. You get a college degree so that you can get a better job, so that you can afford to send your children to college, so that they can get a better job, so that they can afford to send their sons and daughters to college. We all know HOW to pay for college: set $100 to $150 a month aside every month from the day of the child’s birth in conservatively invested accounts.

Actually, doing that given medical bills, insurance costs, car repairs, the mortgage, school activities, clothes, rising energy prices, career setbacks, low wages, paying off our own student loans, etc. often proves more difficult. Politicians recognize the stress that college produces and many will promise anything…..including government paid for scholarships to get elected…..and since this is an election year several Alabama politicians from both political parties have proposed education lotteries to send kids to school for free.

A new study by the American Association of State Colleges and Universities (AASCU) by Daniel J. Hurley, PhD, looked deeply at how other states (including Georgia, Tennessee, and Florida) lottery paid for scholarships were working and found a mixed track record.

Alabama State Senator Bryan Taylor (R) from Prattville said on Facebook. “So much for that lottery idea! According to new report from American Association of State Colleges and Universities, in states that have lottery funds earmarked for education, state spending on education actually declines over time. Compare that with states that DON’T have lotteries — they spend 10 percent more of their budgets on education.” “I think the problem is that it can’t, in practical terms, be executed to work. You would have to have a legislature uninfluenced by the people who will actually make money from the thing, you’d have to have a legislature that wouldn’t supplant existing funding, etc.”

Graduate Student Kati Lebioda actually wrote the paper based on Dr. Hurley’s work wrote: “An Overview of Lottery-Funded Scholarship Programs Among the potential policy alternatives for improving college affordability, state-run lotteries with revenues dedicated to education have stood out as a popular solution. In fact, despite the slow economic recovery after the Great Recession, non-tax revenue sources to support higher education—a category which includes lottery funds—has increased by nearly one-third to $2.9 billion in 2013 from $2.2 billion in 2008.” “44 states have established lottery programs, 26 of which have earmarked proceeds for education—either K-12, higher education or both. Only six states (Alabama, Alaska, Hawaii, Mississippi, Nevada and Utah) do not currently operate lotteries, with Wyoming being the most recent to approve legislation in 2013 creating a lottery that commenced in August 2014.”

Leboida wrote, “…the trend began with the Georgia HOPE (Helping Outstanding Pupils Educationally) scholarship program was established in 199. The Georgia HOPE program initially provided scholarships for students with a minimum high school GPA of 3.0 to cover the full tuition at an in- state public institution or a set amount to be applied to a private college or university in the state. The Georgia HOPE program increased the number of students who stayed in-state for college, it also drastically increased the average competitiveness—or increased ACT/SAT scores and GPAs—of students attending public institutions in Georgia.”

According to the report, Florida’s plan served the largest number of students (162,980) and spent the second highest amount of any state—$312 million. Georgia, near the top of the list in terms of both reach and expenditures, served 117,085 students at a cost of $463 million. On the opposite end, West Virginia has the smallest program, serving 9,954 students at a cost of $48 million. The average award ranged from $1,500 (Kentucky) to over $5,000 (South Carolina), with six of eight lottery-funded scholarship programs covering between one-third and one-half of the average cost of published tuition and fees at that state’s public institutions. The Kentucky scholarship only covered 17.2 percent of the actual cost to attend while the West Virginia scholarship was the highest at 76.7 percent of the cost. Georgia’s HOPE program, lottery-funded scholarships have acted as a lever to encourage the best and brightest students to remain in-state.

Leboida writes, however, that, “While lotteries appear to create a new source of non-tax revenue, actual proceeds rarely match projections. When a state first establishes a new lottery, it does draw funds previously lost to neighboring states’ lotteries, but these initial gains tend to decay or drop off after about five years…A large part of this is the cost associated with running and promoting a lottery in the first place. The largest contributing factor, however, may be the inherently inefficient profit margin of lotteries: after payments to winners, sales commissions to vendors, and lottery administration expenses, only about 34 cents of every dollar generated by lotteries ends up in the state budget (Bowden & Elrod, 2004; Covert, 2014). For comparison purposes, states typically spend less than 1 percent of the amount collected to acquire traditional tax revenues. Moreover, some researchers argue that when considering their high administration costs, lotteries affect state economies negatively, not positively, because dollars spent gambling could have otherwise been spent on consumer goods and services and could be subject to less wasteful collection methods of sales tax (Bowden & Elrod, 2004).”

Leboida continues, “Not only are lottery revenues more expensive to collect than traditional tax revenues, but they also tend to supplant, rather than supplement, general state appropriations for education. In fact, when lottery funds are earmarked for education, the risk of supplanting over supplementing actually increases. Numerous studies in the past three decades have found that while educational expenditures tend to increase immediately in states that enact lotteries, overall spending tends to decrease over time. States without lotteries, on the other hand, end up spending approximately 10 percent more of their budget on education than states with lottery funds earmarked for education (Covert, 2014; Heberling, 2002). This trend is particularly indicative of the unintended, counter-intuitive, negative consequences of employing lottery programs to support education.”

Despite the hype, Leboida writes that lottery revenues are actually a fairly small revenue stream, generally comprising less than 2 percent of state appropriations to education and citizens in lottery states tend to vote against ballot initiatives intended to increase educational expenditures because the lottery proceeds and education are so visibly linked.

Meanwhile legislators in lottery states have used the lottery as an excuse to move other educational expenditures to other high-need areas like corrections or healthcare.

The poor typically do not gain by their state having a lottery, because typically for every dollar of scholarship assistance they receive they lose federal Pell Grant dollars they otherwise would have qualified for. Because scholarship dollars typically only cover outstanding tuition and fees once all other financial aid has been accounted for, low-income students do not receive grant or scholarship dollars above and beyond tuition costs, leaving them to struggle to pay for books, transportation, housing, childcare, and other non-tuition expenses involved in pursuing a post-secondary education. Scholarships like Georgia’s typically are awarded based on merit not need. Upper middle class children (who would have gone to college anyway) get the scholarships because typically they typically score higher on the standardized testing.

Leboida writes, “Part of this shift away from need-based aid can be attributed to underlying ideologies: merit- based scholarship programs play into American values of democracy and the theoretical success of those individuals who work hardest. Additionally, unlike need-based grant programs, which inherently benefit only the poorest students, non-need-based programs can also support middle- and upper- income households—populations that tend to vote at higher percentages. Yet there is significant evidence that rewarding the notion of ‘merit’ only presents an illusion of fairness among student populations…Research shows that merit-based programs disproportionately benefit white and higher income families. These programs’ eligibility standards are designed to limit the pool of students who qualify for award dollars, but in doing so, they often restrict funds to those students with greater financial resources.”

Leboida writes that since lower income people are much more likely to play the lottery, “In essence, poor families are helping send wealthy students to college. Moreover, due to the aggressive nature of lottery advertising and the addictive nature of gambling in general, some critics even argue that the lottery is considerably less voluntary than a traditional economic model typically allows.”

Since State-run lotteries, as an arm of the government, are not subject to the Federal Trade Commission’s truth-in-advertising regulations, Leboida writes, “Many lottery advertising campaigns exploit the addictive nature of gambling to prey on especially vulnerable populations like minorities, low-income families, the elderly, and high school drop-outs (Heberling, 2002). Furthermore, as lottery revenues decay over time, states must invest in more aggressive ad campaigns and create new, more addicting games in order to keep revenues flowing. It is paradoxical for a state government to exploit public ignorance involving the detrimental consequences of gambling in order to help fund public enlightenment through a college education (Selingo, 1999). This ethical ambiguity is particularly salient given the unequally regressive nature of lotteries, and the pattern of decreased state appropriations from the general budget when states earmark lottery revenues for education.”

Democratic candidate for Governor of Alabama, Parker Griffith, has made a lottery one of his campaign promises. Republican incumbent Robert Bentley has said he will not oppose efforts by legislators to pass lottery legislation, but has said that revenues from a lottery should at least partially go to the State’s troubled general fund, where corrections and Medicaid are facing critical funding challenges.