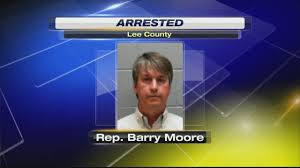 MONTGOMERY—Indicted lawmaker Rep. Barry Moore, R-Enterprise, is not only spending his campaign donations on his legal defense, he is also hiring “private-eyes” with other people’s money.

Moore’s latest FCPA filing show that he raised $16,000, for the week ending October 10. All totaled, Moore had a beginning balance of $35,351.64. Of that amount he spent $27,157.31 on his legal defense. Moore is charged with two felony counts of making false statements and two felony counts of perjury, in relation to the Special Grand Jury probe into Speaker of the House Mike Hubbard. If convicted, Moore could face a maximum of 60 years in State prison.

But, not only did donors pony-up for lawyers at Baxley, Dillard, Mcknight & James and Motley, Motley & Yarbrough, they paid for the services of Dothan-based M & M Investigation.

M & M’s website states, “Are you in need of investigative work but want to keep your information and identity confidential?” Didn’t get the memo that Moore would be paying them with the money he received for campaign contributors, therefore it was not exactly a confidential transaction.

Moore, who is running unopposed for his House seat, raised a good deal of cash from some of the State’s high-flying lobbying groups.

The Business Council of Alabama’s Progress PAC, was Moore’s biggest contributor, giving the troubled lawmaker $7,500. Another $6500 came from the Alabama Nursing Home Association and $2000 was given by ALAPAC Alabama Medical PAC.

Other than a lunch at Islamorada Fish Company, a visit to the Bass Pro Shop in Montgomery, a little $51.83 snack at The Cheese Cake Factory in Birmingham, some gas, and an overnight at the Hampton Inn in Birmingham, there’s little of note in Moore’s report.