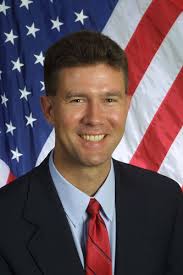 On Thursday, October 23, Republican candidates and office holders addressed the assembled members of the Constitutional Conservatives in Leeds at the historic train Depot. One of the featured speakers was John Merrill, who is running to by the Secretary of State of Alabama.

Hart said, “Barack Obama is a symptom of Christian apathy.”  “I don’t care about Barack Obama.”  Hart said that the Mayor of Leeds is what is important.  We need to get those elections right.  The Constitution is under attack.  The Bible is under attack and it is not a coincidence.  The Democrats are experts at marshalling their forces.  We have got to get our people to the polls.  “If we get the morality in Leeds Alabama right it will turn Washington around.”

Merrill said that if elected, I promise you we will have fair elections.  When that trust and confidence is violated it will be prosecuted to the fullest extent of the law.  Rep. Merrill said that voters have to show photo ID to vote.

Rep. Merrill said that voting is the most precious right that we have and we need to do more to help our military participate in Alabama elections.  There are 56,000 serving overseas around the world.  “Without them we couldn’t be here sharing our rights.”

Merrill said that to start a new business in North Carolina all the paperwork can be finished in 7 to 10 days.  In Delaware it takes 3 days.  In Colorado and Florida the incorporation can be filed and completed on the same day.  The Alabama Secretary of State’s office says it takes 4 months.  Talk to a good lawyer and he says it will take 6 to 9 months; but the office can do it in 9 days for an expedited fee.  Merrill promised to improve that performance if he is elected as Alabama Secretary of State.

Merrill said, “I have been to all 67 counties (in Alabama) at least twice.”  “I have been endorsed by more than 80 members of the state legislature and every association that has made an endorsement.”  Merrill said that he has raised more resources than anyone in the history of this office.

Rep. John Merrill’s opponent for Secretary of State Lula Albert-Kaigler (D).  In 2013 Kaigler ran for Congress as a Democrat when U.S. Representative Jo Bonner retired.  Kaigler got 29.8% of the votes in the First Congressional District Democratic Parimary, losing to Burton LeFlore.  If elected, she would be the first Black woman elected as Alabama Secretary of State.

The general election is November 4.