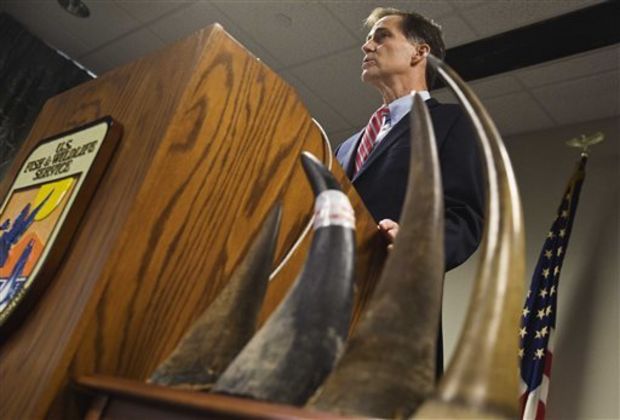 The pair were charged with conspiracy, Lacey Act violations, mail fraud, money laundering and structuring bank deposits to avoid reporting requirements. The Lacey Act is America’s oldest criminal statute addressing illegal poaching and wildlife trafficking. Under the Lacey Act, it is illegal to sell animal hunts that are conducted in violation of state, federal, tribal as well as foreign law.

From 2005 to 2010 Janneman Groenewald lived in Autauga County and his company, Out of Africa Adventurous Safaris, maintained accounts there. During this time period the two brothers traveled throughout the United States attending hunting conventions and gun shows where they sold outfitting services and accommodations to American hunters to be conducted at their ranch in Mussina, South Africa. The pair charged between $3,500 and $15,000 to American hunters for the opportunity to kill what the pair called, “problem rhinos.” According to the government, this was a lie. According to the indictments, the Groenwalds never received the necessary permits from the government of South Africa to kill those animals.

It is illegal to import rhino trophies into the United States. The pair claimed that their American clients could lawfully shoot the “problem rhino”, pose for a picture with the dead animal, and make record book entries, all at a reduced price. The government also alleges that the defendants cut the horns off some of the rhinos with chainsaws and knives and trafficked in the rhino horns on the black market. The pair are accused of money laundering in Autauga County and intentionally misleading regulators by breaking deposits up into small amounts to avoid reporting requirements.

The details of eleven alleged illegal hunts are recorded in the indictments. In one hunt the rhino had to be shot and killed after being repeatedly wounded by a bow and in another Dawie Groenewald used a chainsaw to remove the horn from a sedated rhino that had been hunted with a tranquilizer gun.

None of the American hunters have been charged.

U.S Attorney George Beck said in a statement, “These defendants tricked, lied and defrauded American citizens in order to profit from these illegal rhinoceros hunts. Not only did they break South African laws, but they laundered their ill-gotten gains through our banks here in Alabama. We will not allow United States’ citizens to be used as a tool to destroy a species that is virtually harmless to people or other animals.”

The Acting Assistant Attorney General Sam Hirsch said, “We are literally fighting for the survival of a species today. In that fight, we will do all we can to prosecute those who traffic in rhino horns and sell rhino hunts to Americans in violation of foreign law. This case should send a warning shot to outfitters and hunters that the sale of illegal hunts in the U.S. will be vigorously prosecuted regardless of where the hunt takes place.”

According to their website, Out Of Africa Adventurous Safaris hunts in several regions of various terrain. The company writes, “The concessions are reserved exclusively for our clients in large, private hunting areas. Dense bush, savannahs and hills are the habitats in which the game reaches maturity. The variety of regions allows us to offer a wide range of game with exceptional opportunities to bag valuable trophies. We can offer you 60 species and sub-species in these African countries (South Africa, Botswana, Zimbabwe and Tanzania). The hunting season in South Africa and Botswana is from February to November, in Zimbabwe from March to November, and in Tanzania from July to November. You will be hunting according to your wishes, possibilities and ability. Because of the vastness of the hunting area, we will track in 4×4 vehicles. Once the game has been sighted, it will be hunted on foot. It is at this moment that the actual hunt commences with its challenges, hazards and beauty.”

The company website continues, “Your trophies will be marked, salted, and field prepared prior to being sent to a taxidermist. Out of Africa Adventurous Safaris will do all Taxidermy documentation and arrangements. Trophy Solutions Africa (Dip to ship in 99 days) will take care of the shipping of the trophies.”

The contact persons on the website are Johan & Estie van der Merwe. The company offers the following advice to clients: “Bring a bolt action or a double rifle (muzzleloaders are welcome). For Buffalo, Rhino and Elephant, a minimum calibre of 375 is required. All calibres bigger than this are welcome. For Lions, Leopard, Antelopes and other medium game a calibre of 300 or 30-06 will be sufficient. For dangerous game, 40 full metal-jacket cartridges as well as 40 soft-point cartridges are required. For medium game you will need at least 80 soft-point cartridges. Fit your rifle with a good quality scope with variable power; 1.5-6 x 42, 2.2-9 x 42 or the like. For transportation of your rifle between hunting areas, a soft case per gun is required.” “A valid passport is needed. South Africa requires no Visa. Zimbabwe requires a Visa, ($30). Tanzania requires a Visa, $50.”

The U.S. Fish and Wildlife Service (FWS) issued a statement about the indictments on Facebook:

“The owners of Out of Africa Adventurous Safaris today were charged with selling illegal rhino hunts to unsuspecting American hunters. Demand for rhino horn is soaring: In 2007, 13 rhinos were poached in South Africa. In 2013, poachers killed more than 1,000. This investigation is part of ?#?OperationCrash, an ongoing nationwide effort to halt unlawful trafficking of rhino horns. Since the initial arrest of eight in 2012, there have been more than two dozen arrests and a dozen convictions.”

The illegal trade in rhino horns, ivory, and other wildlife products means that species like rhinoceroses and elephants could become extinct before the end of this century. Many Asians (particularly Chinese) believe that ground rhino horn has medicinal properties. In reality, rhino horns are made of keratin – the same substance as fingernails, toenails, or hair.

FWS Director Ashe Daniel M. Ashe said in a statement, “The fact that defendants used American hunters to execute this scheme is appalling – but not as appalling as the brutal tactics they employed to kill eleven critically endangered wild rhinos. South Africa has worked extraordinarily hard to protect its wild rhino population, using trophy hunts as a key management tool. The illegal ‘hunts’ perpetrated by these criminals undermine that work and the reputation of responsible hunters everywhere.”

Record high demand for illegally traded wildlife products has resulted in an explosion of illicit trade in wildlife in recent years. As a result of the actions of poachers, species such as elephants and rhinoceroses face the risk of significant decline or even extinction.

The U.S. Fish and Wildlife Service is combating wildlife trafficking by targeting and stopping the illicit trade through law enforcement, and reducing demand for illegal products in consumer countries.

Since 1976, trade in rhinoceros horn has been regulated under the Convention on International Trade in Endangered Species of Wild Fauna and Flora (CITES). The U.S. is one of over 170 countries that signed the treaty to protect fish, wildlife and plants that are or may become imperiled due to the demands of international markets. Despite this the demand for rhinoceros horn and black market prices have skyrocketed in recent years.

The investigation of Out of Africa Safaris is part of Operation Crash (named for the term “crash” which describes a herd of rhinoceros). Operation Crash is an ongoing nation-wide effort to detect, deter and prosecute those engaged in the illegal killing of rhinoceros and the unlawful trafficking of rhinoceros horns led by the Special Investigations Unit of the Fish and Wildlife Service Office of Law Enforcement in coordination with the U.S. Department of Justice. To this point Operation Crash has led to 26 arrests and 18 convictions with prison terms as high as 70 months.

South Africa’s National Prosecuting Authority and a specialized endangered species unit within the organized crime unit of the South African Police Service have assisted U.S. authorities with this investigation. The Criminal Division’s Office of International Affairs; the Bureau of Alcohol, Tobacco and Firearms (ATF) office in Montgomery; the Autauga County Sheriff’s Office; Assistant U.S. Attorney Brandon K. Essig; and Richard A. Udell, the Senior Litigation Counsel with the Environmental Crimes Section of the U.S. Department of Justice in Washington have all contributed to this ongoing investigation.