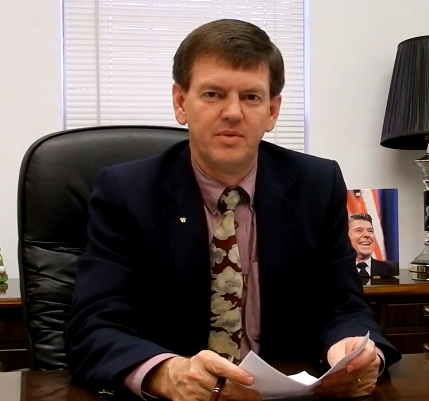 In an email to the committee earlier this week, Wallace specifically asked the other members to “express to the Governor that expanded gambling will not be met without opposition.” Wallace cited the large sum of money spent in the Attorney General’s race as reason for concern.

Wallace said, “We just fought back a blatant attempt by the corrupt gambling crowd to buy the Attorney General’s office, now I read the Governor and Chairman Clouse (Tusc News) putting expanded casino gambling and a lottery on the table.”

The committee was also reminded that the public voted against a pro-gaming amendment pushed by former Governor Don Siegelman in 1999.

Wallace didn’t just call for caution; he called for action as well.

Following the alarm, Wallace put forth a series of positions that he thinks Republicans should use to govern effectively over the next four years.

Wallace called on the Republicans to “right-size” government, reduce bureaucracy and eliminate red tape in order to better grow jobs. He then explained how cutting waste in government would help the state. Wallace believes the state’s taxes could be better used if set aside for prison inmate education, providing insurance to children in need, or some other underfunded program.

Wallace even pointed out how government agencies like Alabama Department of Environmental Management (ADEM) are levying fines against our State’s towns and cities. He indicated the agency’s size may need to be revisited.

Wallace’s last point called for giving the State Auditor, Jim Zeigler, the resources necessary to effectively do the job the voters elected him to do. Wallace wants to see a dedicated staff in place to audit and attack waste in State government. In turn, Wallace believes government could be further reduced by eliminating the Department of Examiners.

Wallace closed by asking everyone not to forget what the elections mean to the Republicans. He said, “Tell the Governor no, on throwing away a victory and giving the game to the gambling bosses. We have fought too hard to take a knee and give up!”

In this article:ALGOP, Byron Shehee