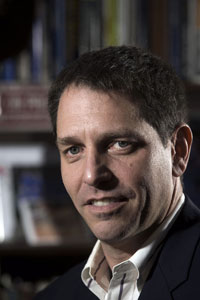 On Wednesday, November 17, Mark Meckler spoke to the Rainy Day Patriots at Hoover Tactical Firearms about the Convention of States (COS) Project of which he is a national board member.

Many conservatives believe that the federal government is too large, is out of control, and has exceeded the mandate that it received from the authors of the U.S. Constitution. Conservatives are however divided on exactly how to do that.

Mark Meckler and the Convention of States Project look to the U.S. Constitution and are proposing that states call an Article V convention to rein in the excesses of the federal government.

Meckler said that the COS effort is supported by former Alaska Governor Sara Palin, conservative talk radio hosts Rush Limbaugh, Glen Beck and Mark Levin, as well as many other conservative leaders.

Meckler said that COS has been strongly opposed by Eagle Forum. Eagle Forum and its longtime leader Phyllis Schlafly believe that there is a danger of a runaway convention doing major damage to the Constitution.

It takes 34 states to call a national conventions (2/3s); but it takes 38 to actually ratify any amendments (3/4s). Meckler said that all it takes to block ratification would be one house in 13 states. Each state can send as many delegates as they want; but each delegation gets just one vote at the convention.

Meckler said that Alaska, Georgia, and Florida have already passed COS resolutions and expressed confidence that they would be able to get 34 by the end of 2015. Meckler predicted that the issue would be brought up in the Republican Presidential Primary process in 2016 and all the GOP candidates would be pressured to state their position on COS.

Alabama almost became the first state to pass COS in the 2014 legislative session. It passed the Alabama House of Representatives and was on the calendar to come up in the Alabama Senate but timed out on the last day of the session.

Meckler said that some liberal groups are also trying to organize a Convention; but the purpose of that convention would be to take money out of politics by proposing amendments to overturn the Citizens United and McCutcheon rulings. Meckler said they want to take “conservative money” out of politics and do not support the COS Project.

Terry Richmond is one of the legislative captains for COS in Alabama.

Rainy Day Patriots founder Suzanne “Zan” Green said that Convention of States Project was the best method she knew of to get the federal government under control.

Meckler was one of the original organizers of the Tea Party movement. He and Zan Green were two of the original participants in the conference call that led to those first tea parties. Meckler said that the 2010 and 2014 elections show that the people are with us. In 2012 Meckler said that Republicans just ran the wrong candidate (Massachusetts Governor Mitt Romney) with the wrong message.