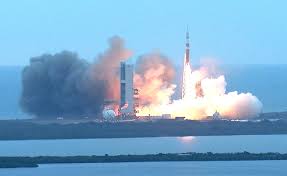 On Friday, December 5 at 7:05 AM NASA launched the Orion spacecraft into orbit for the first time. The short flight into space for the long delayed space shuttle replacement was successful and will allow NASA engineers and scientists to learn more about the Orion capsule before it is launched as a crewed mission.

U.S. Representative Martha Roby (R from Montgomery) said in a statement on Facebook, “Once again, Alabama played a leading role in the next era of space exploration! The Alabama-built Delta IV Rocket this week propelled the Orion spacecraft for an important test mission that is critical to the future of American spaceflight. NASA hopes to send Orion and a crew to an asteroid in the near future, and Mars after that.”

Congressman Mo Brooks (R from Huntsville) said in a Facebook statement, “Congratulations to Orion on a historic flight today. I’m extremely proud of the work done by NASA’s Marshall Space Flight Center and United Launch Alliance in North Alabama, leading us into this new era of spaceflight!”

U.S. Senator Jeff Sessions (R from Alabama) said in a written statement, “NASA’s Marshall Space Flight Center, the Space Launch System, and the United Launch Alliance are a tremendous source of pride for Alabama. This is the beginning of an historic advancement in space and I congratulate the incredible work done to ensure the success of the Orion test flight.”

Rep. Roby added, “Jonathon Walden, a young engineer from Decatur, has worked for 4 years to develop the adapter that connected Orion to the Delta IV Heavy rocket and was able to see it in action during today’s launch.”

Rep. Roby concluded, “Congratulations to everyone who has worked tirelessly to make this launch successful, but especially the team at ULA’s Decatur team who built the rocket and Walden who designed the attachment. What an awesome accomplishment for the state of Alabama and our nation’s space program as a whole.”

Senator Shelby said in a written statement in response to APR’s inquiry, “The Orion test launch is an important step for the future of space exploration and an exciting event given North Alabama’s long-standing role in our nation’s space program. I am confident that the Orion launch will be successful and that NASA will continue to make progress on a launch system that will enable NASA’s deep space exploration goals.”

The Orion spacecraft was launched into space for the first time on top of a Decatur, AL built United Launch Alliance (ULA) Delta IV Heavy launch vehicle at Space Launch Complex 37 at Cape Canaveral Air Force Station (CCAFS) in Florida on Friday. The Orion capsule went into space and then splashed down in the Pacific Ocean approximately 600 miles southwest of San Diego.

Orion orbited the Earth twice during its 4.5 hour trip and traveled to an altitude of 3,600 miles into space. More than 15 times farther than the International Space Station’s orbital position. The flight will test the risk to astronauts and will provide critical data needed to improve Orion’s design and reduce risks to future mission crews.

Friday’s short first voyage of the Orion spacecraft went deeper into space than any spacecraft designed for astronauts has been in more than 40 years.

NASA Administrator Charles Bolden said in a statement, “Today’s flight test of Orion is a huge step for NASA and a really critical part of our work to pioneer deep space on our Journey to Mars. The teams did a tremendous job putting Orion through its paces in the real environment it will endure as we push the boundary of human exploration in the coming years.”

Orion Program Manager Mark Geyer said, “We really pushed Orion as much as we could to give us real data that we can use to improve Orion’s design going forward. In the coming weeks and months we’ll be taking a look at that invaluable information and applying lessons learned to the next Orion spacecraft already in production for the first mission atop the Space Launch System rocket.”

A team of NASA, U.S. Navy and Lockheed Martin personnel aboard the USS Anchorage are in the process of recovering Orion and will return it to U.S. Naval Base San Diego.

Lockheed Martin is NASA’s prime contractor for Orion and began manufacturing the Orion crew module in 2011 and delivered it in July 2012 to the Neil Armstrong Operations & Checkout Facility at Kennedy.

Future Orion missions will be launched by the larger Space Launch System which is being designed, engineered, and tested in Huntsville at the Marshall Space Flight Center.

Orion was intended to fly on the Ares I launch vehicle, then the Space Launch System after Ares I was cancelled.

The SLS will be the most powerful rocket ever built for deep space missions. NASA plans to use the SLS to launch a craft to distant objects, including an asteroid and ultimately the planet Mars.

Since building the space shuttle in the 1970s and early 80s, NASA has started and then stopped other space exploration class vehicles. Orion is the first project to get this far in the process since the agency built the space shuttle.