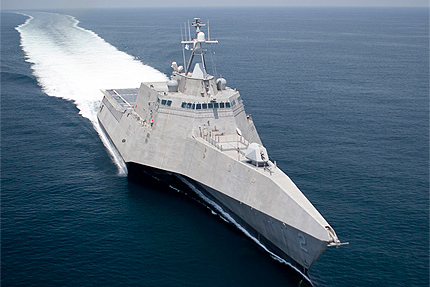 On December 11, Congressman Bradley Byrne (R-Montrose) and US Senator Jeff Sessions (R-Alabama) responded to Secretary of Defense Chuck Hagel’s decision on the future of the Littoral Combat Ship (LCS) program. The decision reaffirms the Navy’s need for 52 ships in the fleet, after Secretary Hagel had previously halted procurement of the current LCS variants at 32.

Secretary Hagel announced details of the Navy’s long anticipated “Small Surface Combatant Task Force” report. The report itself is classified, but Secretary Hagel said that he agrees with the Navy’s decision to update the current versions of the LCS, making them more lethal and survivable, rather than starting over and designing a new ship, using a foreign design or repurposing another ship already in the fleet. The 52 ship requirement will remain.

Congressman Byrne said: “Secretary Hagel’s decision confirms what I have known all along: the Littoral Combat Ship represents the future of the Naval fleet. My staff and I have worked hard from day one to build broad support for this important military program, and this report is a very positive development.”

Senator Sessions said in a written statement, “Today, the Navy released the long-anticipated findings of the Small Surface Combatant Task Force charged with examining the Littoral Combat Ship (LCS) and making recommendations for what sea frame will best serve the Navy’s small surface requirements. This was a careful evaluation that considered many options. They recommend that the design of the Small Surface Combatant (SSC), a more capable ship to follow the Littoral Combat Ship, will be based on existing LCS framework.”

Secretary Hagel said that the LCS will receive, “Improvements in ship lethality and survivability, delivering enhanced naval combat performance at an affordable price…The more lethal and survivable SSC will meet a broader set of missions across the range of military operations, and addresses the Navy’s top war-fighting priorities.”

The Independence-class LCS is built in the Port of Mobile by Austal USA, providing 4,000 direct jobs in Alabama’s First Congressional District.

Congressman Byrne said, “One of the main selling points of the LCS originally was the ship’s adaptability. By upgrading the current LCS variants to improve lethality and survivability, the Navy is choosing to keep the industrial base in place and avoid the unnecessary costs of starting a new program…I remain steadfastly committed to supporting the Navy in fighting for the LCS and the hard working men and women at the Austal shipyard in Mobile. At a time when we have such a wide range of threats, we need to make sure our military has all the tools in its arsenal to appropriately respond. The Littoral Combat Ship is a key piece to the puzzle.”

Byrne said: “There is no greater responsibility of the Federal government than providing for the national defense. Currently, our nation’s military men and women face a wide range of challenges around the globe. From radical terrorists in the Middle East to aggressive behavior from Russia to an ever hostile China, we must make sure our Armed Forces have the resources to be successful in keeping the American people safe.”

The Independence-class LCS has a top speed of 44 knots, carries a crew of just 40 sailors, and can be specially configured for mine sweeping, sub hunting, operating unmanned aerial vehicles, operating helicopters, and can support Marine or Special forces operations. The cost is $704 million each, although the original navy estimate was that the LCS would cost just $220 million each. The LCS is much smaller than the Navy’s destroyers allowing it to operate in the shallow waters in the littoral combat zone.

The US Navy plan called for building 55 LCSs with the first twenty being ten each of the Independence-class and Freedom-class. They had originally proposed a competition between the two designs with winner take all, but eventually decided to split the order between both shipyards, and accepted both the Austal designed Independence class and the more conventional, Freedom class.

Austal is the largest builder of aluminum ships in the world. Austal has two shipyards: one in Western Australia and one in Mobile. Started in 1988, Austal has manufactured 220 vessels to date, including warships, ferries, and luxury motor yachts.