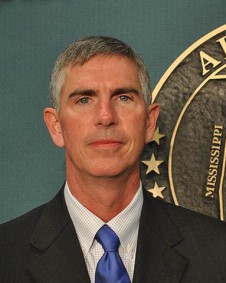 MONTGOMERY—On Tuesday, Gov. Robert Bentley announced a shake-up at the State’s Department of Corrections, in which political forces have pushed Commissioner Kim Thomas to resign his post.

Officials close to Corrections and State government say, that Rep. Allen Farley (R-McCalla) orchestrated a vicious campaign against Thomas, which led to his forced resignation.

Farley, elected to the House in 2010, is a former Jefferson County Assistant Sheriff, who oversaw the County Jail in Bessemer

He was appointed Vice Chairman of the Legislature’s Prison Oversight Committee by Speaker Mike Hubbard.

Sources close to the situation say that Farley became fixated with the female inmates at Alabama’s Julia Tutwiler Prison for Women, after his appointment to the Prison Oversight Committee. Farley has publicly criticized Thomas, laying the blame for the prison conditions at his feet. This, and some behind-the-scene scheming from Farley, spelled the end for Thomas.

It has been widely speculated that Farley’s true motivation for the attacks on Thomas were his own desire to be appointed commissioner, once Thomas was removed.

In June, 2014, al.com reported that Farley told Gov. Bentley that his should “consider replacing Thomas with someone who is not so deeply rooted in the troubled system.” (See article here.)

Thomas has dedicated his entire adult life to Alabama’s Department of Corrections, beginning as a correctional officer and rising through the ranks like no other commissioner before him.

According to his State bio, Thomas “rose through the ranks as Correctional Trainee, Correctional Officer, Correctional Sergeant, and Classification Specialist at a maximum security facility. While employed with the Department, Commissioner Thomas attended the Birmingham School of Law and earned his Juris Doctorate in 1993. In April 1995, he was given the privilege of representing the employees of the Department in the ADOC Legal Division as an Assistant General Counsel. Prior to his appointment as Commissioner, he served as General Counsel for Commissioners Donal Campbell and Richard Allen.”< According to a press statement from the Governor’s Office, ”Colonel Jefferson S. Dunn will become the new commissioner at the Alabama Department of Corrections upon his retirement from the United States Air Force in March.” Bentley, praised Thomas, saying ““Kim Thomas has been a loyal member of my team, and has devoted his career to serving the department. I appreciate Kim’s service to the Alabama Department of Corrections, and I know he will work with Colonel Dunn and Billy Sharp on a smooth transition. I wish him all the best in retirement.” But, it was not retirement that was on Thomas’ mind, rather, he wanted to finish the job of prison reform that he had fought so hard to achieve. Speaking off-the-record, a State official with ties to corrections painted a picture of Thomas as a "scapegoat” who had the misfortune to trust politicians. Governor Bentley has promised to make hard choices to bring change to the decade old problems facing Alabama prisons.