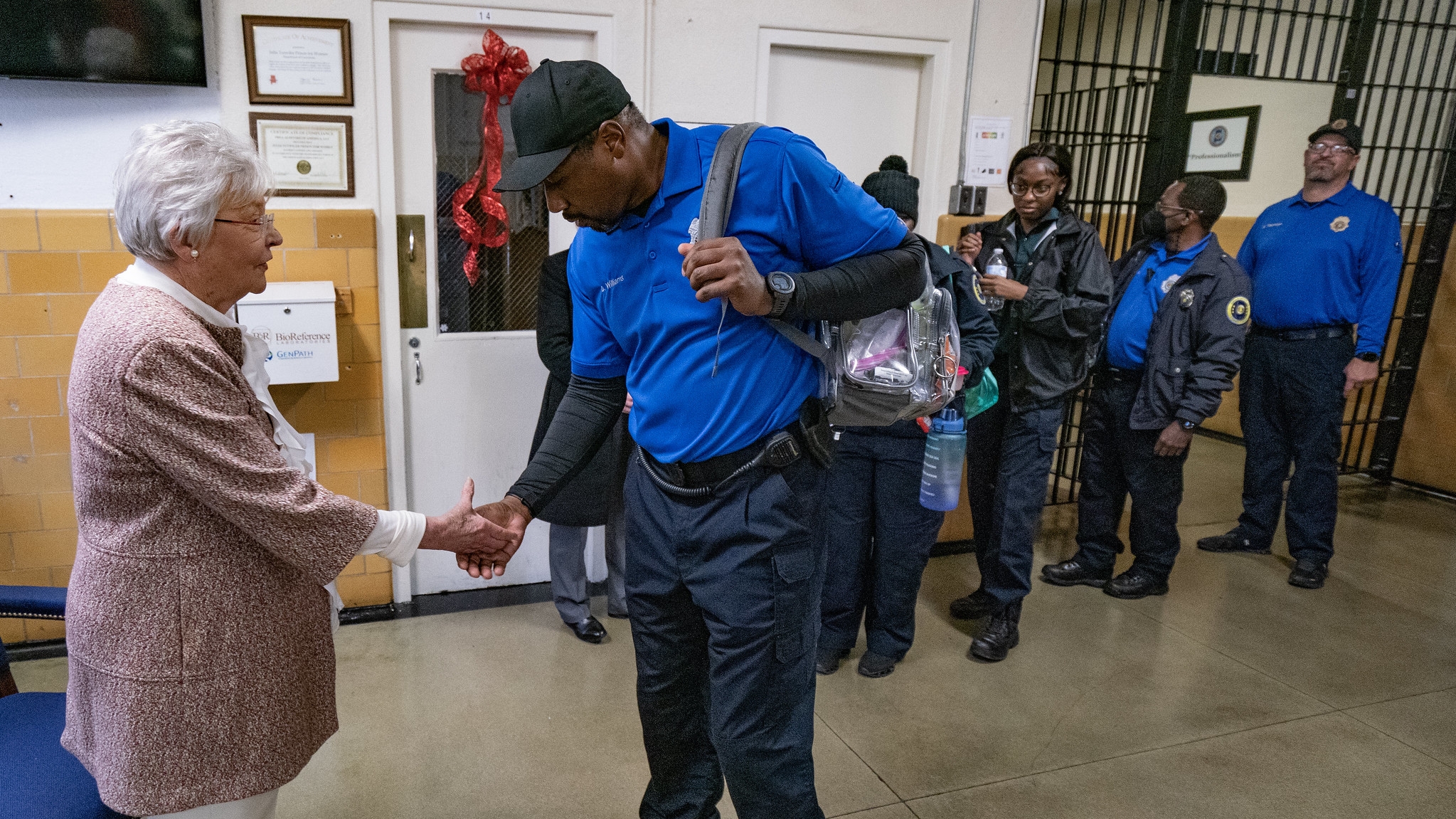 Governor Kay Ivey visited Julia Tutwiler Prison to thank officers for their work and presented them with a challenge coin Wednesday December 21, 2022 in Wetumpka, Ala. Governor’s Office/Hal Yeager

In surprise visits, Alabama Governor Kay Ivey on Tuesday appeared at Kilby Correctional Facility and Tutwiler Women’s Facility to “demonstrate her appreciation and support for correctional officers and support staff” at both state prisons, according to a statement from the Governor’s office.

Occurring during the routine shift changes at both facilities, Ivey greeted and expressed her support for correctional guards and officials.

Kilby Correctional Facility is the most overcrowded of the state’s major prisons; the facility was originally designed to house only 440 incarcerated individuals, with the most recently released month-end population being 1,317 individuals housed in the 53-year-old prison. As a percentage, the prison is currently at 299.3 percent over-capacity.

Tutwiler Women’s Facility, which is the only female maximum security prison in the state, is also overcapacity, with 517 incarcerated women housed in a space originally meant for 417.

“The work of correctional staff is not easy,” Ivey said in a statement released on Thursday. “In fact, it may just be one of the toughest jobs in the country, absent of the recognition that is beyond well-deserved. Corrections officers and support staff play a vital role in keeping our families and communities safe, while providing opportunities for rehabilitation to the inmates willing to better themselves.”

In a statement released alongside the Governor, ADOC Commissioner John Hamm thanked Ivey’s support of correctional officers and staff in their operations of the state’s 15 major prisons and 11 combined work and community work release centers statewide.

“Working in Corrections can be compared to managing a small city where you provide all of the food, laundry, utility and maintenance services, while also providing security and protection to the public and incarcerated,” said Commissioner Hamm. “I thank Governor Ivey for her constant recognition and support of our correctional staff. They are essential to day-to-day operations, and without them, safety, security and successful rehabilitation wouldn’t be possible.”

A recent analysis from the Equal Justice Initiative estimates the current number of incarcerated individuals confirmed dead over the last 11 months to be 222, an enormous number of fatalities at a record level for the state that surpasses the level of death brought on by the pandemic.

One in five of those deceased in state prisons died as a result of violence, possible drug overdose, and suicide, the Initiative found

At the same time, at least seven past and present correctional officers have been arrested and charged with criminal offenses in the last several weeks. The most recent came on Wednesday when a former Limestone Correctional Facility lieutenant and his wife were arrested and charged with bribery, corruption, and promoting contraband in prisons. One peculiar item of contraband that the former corrections lieutenant is alleged to have been in possession of while in the prison is hamburgers, along with a copy of National Geographic and a smart watch, according to the Montgomery Advertiser.

The U.S. Department of Justice is still pursuing its lawsuit against the ADOC and the state of Alabama, claiming officials are willfully ignorant of unconstitutional and inhumane conditions within state prisons. The suit cites a chronic lack of correctional staff as a key factor in the rising levels of violent incidents and death within state facilities.