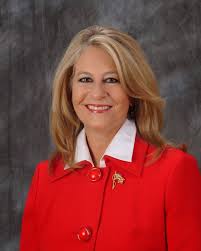 Terry Lathan is the former Chairman of the Mobile County Republican Party and seemed to be the favorite of executive committee members who considered themselves to be backers of outgoing Chairman Bill Armistead. The dissenters, who have been highly critical of Armistead, for the most part seemed to be gravitating behind former State Representative Mary Sue McClurkin (R-Indian Springs).

Before the vote, Chairman Lathan said, “I am a positive person.” “Alabama is the reddest state in the nation and we are proud of it.” Lathan touted the accomplishments of the party under Armistead and said, “We have had a record breaking fundraising year last year.”

Mrs. Lathan said we can not veer from our platform because those people who say that there is not a dimes worth of difference between the Republicans and the Democrats would be proven true if we did.

Mrs. Lathan said, “It is time for party unity.” Lathan said that if you combine more communications you have transparency. Transparency breeds trust.

Lathan held up a card that was being spread attacking her candidacy and thundered, “If you did not have the nerve to sign your name to it you should at least spell my name correctly.”

Lathan said that instead of attacking fellow Republicans you should use your words to grow the party. “The enemy is outside this room and they are called liberals.”

Lathan said we can not stray from our principles. They are non-negotiable.

Lathan’s husband, Jerry Lathan, said that he was stepping down as Finance Chairman after 14 years on the State steering committee. The Alabama Republican Party had $2 million contributions raised in the last year. There have been tremendous changes over the last 14 years on the steering committee and over the 28 years that he has been a member of the State executive committee. Mr. Lathan said that the new Chairman (this was before the votes had been tabulated) can select their own finance chair.

Former Alabama Republican Party Chairman Bill Armistead said that being Chairman, “Has been the greatest honor of my life.”

Larry Lee will be the guest speaker: discussion will be about education initiatives in rural counties and the ACA. ALGOP Treasurer David Wheeler will join the group as well. DON’T MISS THIS ONE!”