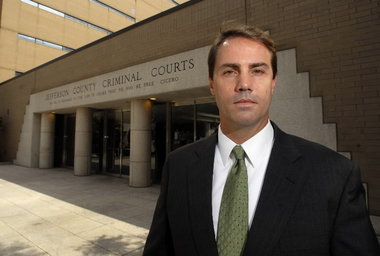 DA Falls discussed the Prison Reform proposal that has passed the Alabama Senate, and is now before the House.  Falls says that he supports the sentencing commission which passed a few years ago: “[The] Law that we are working with, on most of our cases now.” Falls said that a few years ago before the sentencing commission, if you were caught with a gram of cocaine in one jurisdiction, you could get ten years in prison and in another you might get probation.

Falls said that 20 years ago, crime, due to the drug situation, had gotten out of control. The legislature responded by getting tough on crime and throwing more people in prison.  It worked. Crime has gradually decreased.  Then the recession hit and the first thing that legislators looked at to cut costs is the number of people in prison.  The Alabama legislature has changed the sentencing laws and made them uniform across the State so fewer people are going to prison.

The problem the legislature has is that the Alabama Department of Corrections is overcrowded.  The prisons were built to hold 14,000 people; but we have got over 25,000 people in there. Sentence reform is helping but it is not decreasing the population fast enough.

Falls said, “I like some parts of it (the prison reform proposal). Some parts I am not crazy about.”

Falls said that he likes the after prison supervision part of the bill. If you send someone to prison for 3 years you don’t want to turn that person loose in the town he came from and then lose that person. He needs to meet with someone once a week who asks them is they got a job, are they staying off drugs, and doing drug testing. It is the same with criminals on probation. “If you do those kinds of things then people are less likely to reoffend.”

Falls said that there are prison reform, “Parts I don’t like. Right now under the proposal if I get caught dealing heroin, say I am guilty, and I don’t go to prison.” A few years ago Alabama had 67 overdose deaths from heroin. The State had 129 in 2014. That does not count the synthetic drugs, the oxcycotin, and the lortabs. Add those and that is another 100 deaths. “It is not a good idea to create a law that says somebody selling heroine can not go to prison….My responsibility is keeping all of you, your friends, and your parents safe. I need the laws to make sense. When somebody needs to go to prison I need to be able to send them in prison.”

Falls said that the DA association and Police Chief association are working in Montgomery to improve the legislation.

On capital punishment, Falls said that the penalty for murder is ten years to life. Capital murder is a murder that has an abrogating factor like murdering someone while committing a robbery.  The penalty for capital murder is life without parole or death. Those are the only two punishments.  Falls said that death penalty cases are difficult to prosecute because in every death penalty case there will be teams of lawyers out of New York or California who volunteer to look at that case representing the accused from every possible angle.

“Death penalty cases are very tough, both on the front end and on the back end.” Standing in front of a jury and asking a jury to put someone to death is the hardest thing I have ever had to do. The jury makes a recommendation and the judge makes the final decision.  Falls said that because of the difficulty he expect that fewer death penalty verdicts will be given over time; however we should not get rid of death penalty.  Some cases deserve the death penalty. The Boston Bomber for an example.

Falls said the, “Biggest challenge we are facing is the break down in the relationship between the community and the police…Witnesses won’t testify. We have to plea cases down because witnesses are not willing to cooperate. Boston was reaching a 0 percent conviction rate in young black male on black male violence because the community will not cooperate with police.”

Falls said that he has started a white collar crime unit and are working on things like identity theft. I hired an investigator away from the Gardendale Police Department. I have four attorneys in that unit. Our most noteworthy public corruption case was the head of the Birmingham school board. He was not living in the district. We got to looking at the case and found ethics violations as well.

We have not had a Larry Langford type case yet; but we will be ready for it when we do.

Falls said that it is frustrating when he hears the public say that we need to just work harder. “My office is working at 110 percent capacity.”

The public doesn’t like government when they see public officials, like Langford, abusing their position.  I assure you that I will prosecute the bad officials when we find them.  “I want them to have a positive view” on government.

The Alabama Political Reporter asked Falls how his office would be impacted by an 11 percent cut as some have suggested.

Falls said, Based on the numbers I have seen thus far, in 2008 we received a $1.9 million appropriation from the State of Alabama. Now we are in the $800,000 range. This would take us down to $650,000. I don’t want to have to lay off employees. I don’t want to lay off my investigator that I just hired. I have 8000 felony cases that come into my office each year, and 15,000 misdemeanors. I have got to keep them moving because there are always new cases coming in.  It is like moving a pile of gravel. You can move gravel with a shovel or move it with a tractor.  If there is just one person to move things along victims of crime will have to wait longer for justice.  It will be harder to bring cases to trial.”

Falls said that he gets other funding from Jefferson County and they have some corporate funding; but on dealing with a $200.000 cut, “I don’t want it to happen.”

Falls asked for the Young Republicans to help him next year when he faces reelection.

GBYR Chair Jackie Curtiss said, “We don’t want a Democrat as district attorney” and said that re-electing Falls was a major priority for the YRs.