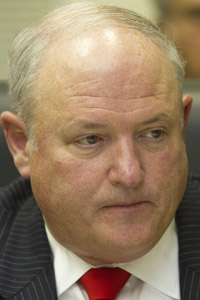 Commissioner Black said in a statement:

“As a County Commissioner, I oppose the school tax on which citizens will vote this coming Tuesday. Rather than paying higher taxes, I would prefer that we, the citizens of Colbert County, would have a discussion about improving the quality of education.  We should be asking why our schools can’t be amongst the top rated in the state, especially since we already spend over $10K per student, more than 92 percent of counties here in Alabama.  We should be asking to see the current budget, looking at how current dollars are being spent, and how we could improve matters. We should be asking for, and expect, excellence!”

Commissioner Black continued, “Our teachers already do an outstanding job!  I thank them for that.  Likewise, I encourage our students to strive for excellence! Better education leads to better jobs and higher incomes, which benefits us all.  The more knowledge our students have, the better equipped they will be for all aspects of life. Both the quality and the perception, of our schools directly impacts economic growth, residential development, and quality of life. However, simply spending more of the taxpayer’s money is not the way to accomplish this. We need a different discussion. One about academic excellence, not more taxes.”

“We have a number of concerns about this tax increase.  Not only will this tax increase place a huge burden on our farmers, but it will hurt our homeowners and renters as well. Homeowners will see their annual taxes increase, and many renters will likely see their costs increase over the next few years as the property owners struggle to adapt to the higher rates. It is simply impossible to raise taxes by 75 percent in a two year period and not see rates increase.”

The Stop the Farm Tax PAC describes itself as a grassroots organization dedicated to raising awareness about Tuesday’s election.

Supt. Olivis said, “We’re not planning for teacher layoffs this year, but we will have to absorb some retirements,” he said. “We’ve gotten our locally-funded units down from 24 to 14, so we’ve trimmed about as much as possible at this point. We have to look to the future, and having this funding will certainly help us secure a better future for our school district.”

Voters in Lawrence and Baldwin Counties have both recently rejected tax increases.