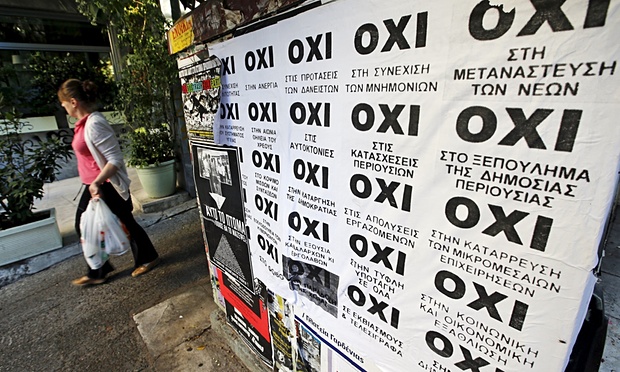 The Managing Director of the International Monetary Fund (IMF) Ms. Christine Lagarde, issued a statement on Monday, July 6 after the people of Greece voted to reject the proposals: “The IMF has taken note of yesterday’s referendum held in Greece. We are monitoring the situation closely and stand ready to assist Greece if requested to do so.”

The US State Department said in a statement on before the default: “Greece continues to present a challenging climate for investment, both foreign and domestic. The previous government made substantial progress in carrying out fiscal and structural economic reforms. A number of these reforms aimed to simplify the investment framework, and the government actively sought to attract foreign investment to drive the country’s long-term economic recovery.

The slow progress of these negotiations, Greece’s increasingly tight public finances and concern over the government’s long-term commitment to market-friendly reforms has contributed to renewed economic uncertainty…Concern over the direction of the new government’s national economic policies has essentially frozen new investment and caused some existing investors to scale down or withdraw entirely from the Greek market.”

According to the state Department at the end of 2014, public debt in Greece reached a high of 177.7 percent of GDP.  The Greek economy posted modest growth of around 0.8 percent in 2014, the first positive growth since 2008. Since 2008, Greek GDP has shrunk by 28 percent. The massive drop in Greek incomes both from the global Great Recession and austerity measures meant to stabilize the economy have led to a tremendous increase in nonperforming loans (NPLs). The banking sector was recapitalized in 2013 and 2014 but the economy contracted in the fourth quarter of 2014 leading Greeks to withdraw over 28 billion EUROs.

Greece’s bailout loans are primarily in the form of bilateral loans from other Eurozone member states.  According to the State Department analysis the terms are very favorable, with low interest payments and a long repayment profile.

The Leftist Syriza Party controlled Greek government had urged voters to say “No” to the terms of a bailout package, but opponents warned that this could see Greece ejected from the Eurozone.  Greece’s current bailout program with the European Commission, International Monetary Fund (IMF) and European Central Bank (ECB) ran out on Tuesday.

The banks have been shut down all week and limits on cash withdrawals have been implemented.

Greek Prime Minister Alexis Tsipras said that Greeks made a “brave choice” in voting to reject the terms of an international bailout.  The final result was 61.3 percent voting “No”, to just 38.7 percent voting “Yes”.

No word has come on whether or not Europe is going to eject Greece from the European Union or not.

Jeroen Dijsselbloem, who heads the Eurozone’s group of finance ministers, called the referendum result “very regrettable” for the future of Greece.

The Prime Minister has appointed Euclid Tsakalotos as the new finance minister.

For decades following World War II the global economy has experienced positive economic growth. Governments knowing that their revenues were increasing every year ran up massive bond debts. Rising revenues would mean that paying the service on those debts would be easier and easier; however growth has been lackluster following the Great Recession and servicing the bond debts has gotten to be more and more difficult for governments.  Puerto Rico announced last week that they would be unable to pay the debt service on their $77 billion in outstanding bond debt.

(Original reporting by Fox News and CNN contributed to this report.)