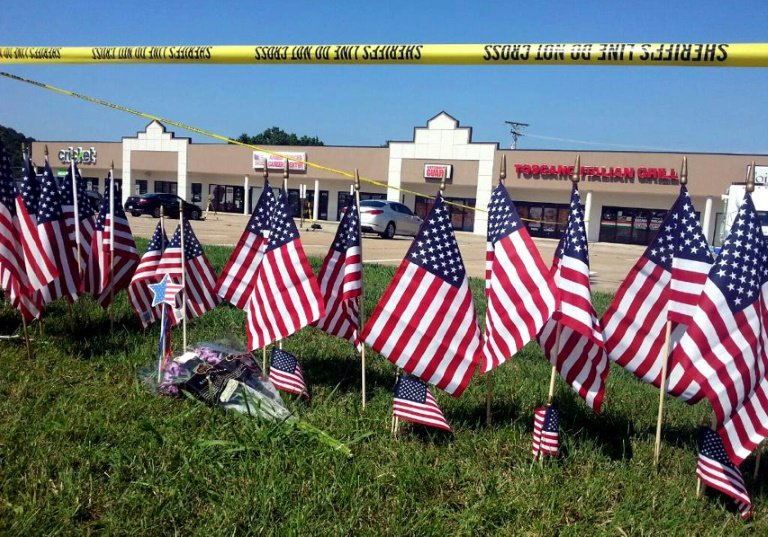 Thursday, July 16, four US Marines and a Sailor are dead in two attacks: one, in a military recruitment office, the other at a Naval training center seven miles apart in Chattanooga Tennessee.  Another two people were reportedly injured in the two attacks.

Early reports are that the shooter, Muhammed Youssef Abdulazeez, 24 was born in Kuwait, and has an engineering degree from the University of Tennessee in Chattanooga.  Abdulazeez worked briefly as an intern for the Tennessee Valley Authority (TVA).  Dr. Azhar Sheikh, a founding member of the Islamic Society of Greater Chattanooga, told the New York Times that Abdulazeez had begun attending regular Friday prayers over the past two to three months.

Abdulazeez managed to get off over 40 rounds before finally being killed by police officers.  The soldiers, who are not allowed to be armed on base due to a questionable 1992 rule, could only attempt to find cover under office furniture during the attack.  The incident is being investigated as a possible terrorist attack.  Attorney General Loretta Lynch said in a statement that she has instructed the FBI to take the lead agency position in the investigation.  Fox News is reporting that over 100 FBI agents are on the ground investigating this attack.

Some news sources are reporting that it appears that ISIS, who have been calling for attacks on US military personnel, where they live, may have taken responsibility for the attack ten minutes before that attack, though they didn’t mention Chattanooga or Abdulazeez by name.

Government officials are telling reporters that they were not tracking Abdulazeez, and there is no evidence, at this time, that he was working for ISIS, or any other known terrorist group.

Tennessee Governor Bill Haslam (R) said, “Lives have been lost from some faithful people who have been serving our country, and I think I join all Tennesseans in being both sickened and saddened by this senseless act.”

President Obama said, “It is a heartbreaking circumstance for these individuals who served our country with great valor to be killed in this fashion.”

Congressman Bradley Byrne (R-Montrose) said, “The devastating news out of Chattanooga should hit at the heart of every American. Our nation’s Marines put their life on the line everyday while serving our Nation oversees, and they shouldn’t also be under attack here at home. Please join me in saying a prayer for all those involved and ask for healing for the community of Chattanooga and our nation’s military.”

Alabama State Auditor Jim Zeigler (R) said, “The facility where Muslim Muhammad Youssef Abdulazeez shot and killed the four US Marines was marked by signs as a gun-free zone. This just proves that criminals and terrorists pay no attention to these useless signs. Praying for the families and friends. Praying for our Nation.”

State Representative Mack Butler (R-Rainbow City) said, “Praying for Chattanooga. Things like this used to only happen in other parts of the world. It was noted in the article that the Islamic State group had been encouraging extremists to carry out attacks in the US, but it’s too early to know if this shooter was affiliated. Please pray for the horrific situation and all the families involved.”

Speaker of the US House of Representatives John Boehner (R-Ohio) released a statement following the attack on the US Marines in Chattanooga, Tennessee:  “Today’s cowardly attack is a reminder that our men and women in uniform are under constant threat, no matter where they serve.  I’m deeply saddened by this loss of life, and on behalf of the whole House, offer condolences to the families who lost loved ones today.  Our thoughts and prayers are with them, the people of Tennessee, and all of our troops.”