Auditor Jim Zeigler said in a statement, “90 percent of the money to run our state parks comes from admission fees and sales. There is no reason to close them if the tax increases do not pass. This is an obvious political threat to pressure the legislature and the public to support the Bentley tax increases.”

The threat to punish Alabama park users if they don’t pressure legislators to give him more money is a repeat of threats that Bentley issued during the regular legislative session.

According to original reporting by the ‘Montgomery Advertiser’s Bryan Lyman, this time Gov. Bentley even suggested that if ordered state parks to close, he would put signs at the gates listing the Alabama House and Senate members who voted to do so. Gov. Bentley said, “We’re not going to get blamed for it, because we’re going to put the blame where the blame is. The people are going to know who’s responsible for not solving it.”

None of this is new. On Tuesday, April 15, State Parks Director Lien threatened to start closing state parks as early as May 1, unless the legislature caves in to Gov. Bentley’s demands for tax increases. Under director Lien’s plan 15 of the 22 parks would close.

An estimated 300 state Parks employees would be let go under the administration’s plan. The parks will lose $10 million in funding in a proposed budget that has been introduced in both the regular session (where it was vetoed by the Governor) and in the last Special Session where the House voted the package down in retaliation for the Senate rejecting a House bill to un-earmark hundreds of millions of dollars.

Tuesday, April 21 Alabama State Auditor Jim Zeigler (R) introduced his own plan to save the State Parks System by identifying $13 million in savings by defunding the office of the Examiner of Public Accounts.

Zeigler announced his plan in a speech to the Tuscaloosa Rotary Club. Auditor Zeigler said that he is proposing that the auditing of state agencies be privatized and done by private CPA firms. That would eliminate the Examiners of Public Accounts and its $13 million a year budget. That money would be used instead for the parks.

That plan did not go anywhere.

State Senator Clay Scofield (R from Arab) proposed funding the state Parks by moving funding that is dedicated to Forever Wild for buying new state lands to the maintenance of the state parks. That plan would require a vote of the people. During the last special session that plan passed the Senate; but could not get out of committee in the House.

The Parks generate an estimated 85 to 90 percent of their funding through user fees. Some legislators have proposed raising the fees so that the parks don’t need additional funding. Bentley backed down from threats that he would close the parks as early as last May.

Auditor Zeigler said in a statement, “We have been told 15 state parks will close without the tax increases. That is an incomplete picture. There are other options, and my plan is an option that needs to be considered.”

Governor Robert Bentley has asked for over $301 million in new taxes to pay for the state’s General Fund needs but that plan can’t get to the floor of either House.  Sen. Marsh attempted to transfer $220 million in use taxes from the Education Trust Fund (ETF) to State General Fund (SGF) stalled in the Senate. There appears to be growing consensus around a plan proposed by Sen. Paul Sanford to move just $150 million to the SGF and balance the rest of it with $50 million in cuts. Bentley is vowing to veto any budget that doesn’t give him $301 million more to spend every year. 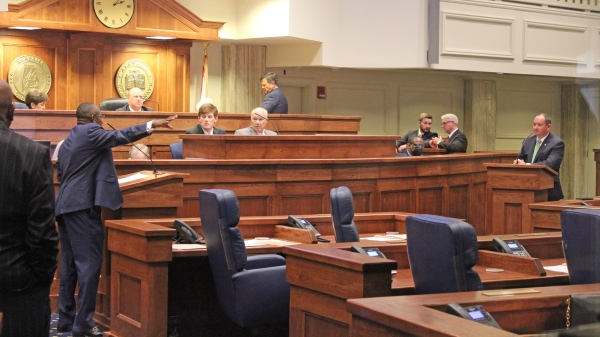