His name was Adam Brown.

He was well-behaved, well-liked, and fearless as a daredevil. But after graduating high school, he fell in with the wrong crowd and became addicted to crack cocaine. After his arrest, the judge allowed him to go to a Christian rehabilitation center called Teen Challenge instead of going to prison.

Through Teen Challenge, Adam rededicated his life to Jesus Christ and broke his crack addiction. After completing Teen Challenge’s program, Adam joined the Navy and became a SEAL. He served multiple tours in Iraq and Afghanistan, saving many American lives through his service. He was killed in action in Afghanistan in 2010, shortly before his SEAL team killed Osama bin Laden.

Adam did not have a good start to his adult life, but he got a second chance and lived the rest of his life as an American hero—thanks in large part to Teen Challenge.

But a bill passed by the Alabama Legislature this past session, which was signed by Governor Ivey yesterday, threatens Teen Challenge and other faith-based recovery camps by subjecting them to the possibility of a takeover by the Department of Human Resources.

Josh Moon wrote an article yesterday praising the bill. I’m here to tell the other side of the story.

HB440 targets religious, faith-based, and church nonprofit organizations like Teen Challenge that are designed to get teens back on track. The bill supposedly was passed in response to the case of Saving Youth Foundation, a so-called faith-based boarding school in the Mobile area that was run by evil people who abused the children entrusted to them. Thankfully, Saving Youth Foundation was shut down, all the children were rescued, and their abusers are now in prison.

But the Southern Poverty Law Center never wastes an opportunity to crack down on religious freedom. The original version of HB440, which was pushed by the SPLC, included a provision forbidding these faith-based organizations to counsel students that same-sex attractions are wrong. Thankfully, this anti-religious-liberty provision did not pass out of committee. But if the SPLC couldn’t force Christian camps to violate their beliefs, then the most harmful option remaining was to regulate them to death. And that’s exactly what the remaining parts of HB440 were designed to do.

Here are some of HB440’s regulations on Christian camps:

Before getting into the multiple constitutional violations here, let’s look at the common-sense problems with this bill. First, by requiring licensing of every counselor according to the DHR’s rules, HB440 gives the DHR the power to decide which religious staff members are qualified to use religious methods to treat the residents. In addition, by giving the DHR the right to grant the residents any right that it chooses, HB440 gives the DHR veto power over basically anything that these camps do. It also gives the DHR the right to impose whatever fee, however much, on these camps for any reason that it deems necessary. As Chief Justice Marshall once warned in a similar context, “the power to tax is the power to destroy.” McCullough v. Maryland, 17 U.S. 316, 431 (1819). Finally, if anyone ever came onto the camp grounds and wanted to harm the residents, then the staff members would be powerless to protect them through force of arms.

HB440 is not only bad policy, which threatens the liberties and lives of the residents and staff members, but it is also unconstitutional under both the federal and state constitutions.  The First and Fourteenth Amendments to the United States Constitution forbid laws that prohibit free exercise of religion. In 1993, the Supreme Court ruled in Church of Lukumi Babalu Aye, Inc. v. Hialeah that a law that targets religious exercise must survive strict-scrutiny review, which is the toughest standard of review applied in modern constitutional cases. In order to survive strict-scrutiny review, the law in question must (1) serve a compelling governmental interest and (2) must be the least restrictive means of achieving that interest. No rational person could conclude that giving the DHR the power to decide who is qualified to offer religious counseling, to impose whatever fee it wants, and to veto any action of a Christian camp is the least restrictive way to protect the residents. Far from being the least restrictive way of achieving its objective, HB440 completely subjects these Christian camps to the DHR’s control. For the same reason, HB440 is also unconstitutional under the Alabama Religious Freedom Amendment, which also imposes the strict-scrutiny test on any law burdening religious exercise.

Likewise, Amendment 888 of the Alabama Constitution requires any restriction on the right to bear arms to pass the strict-scrutiny test. If sued, the government will have to explain why a complete prohibition on firearms is the least restrictive way of achieving the government’s objective. It will have a hard time explaining why it would not be adequate for staff members to have completed some kind of firearms training or why they could not at least keep their firearms in their vehicles. If the Second Amendment is not clear enough, then the Alabama Constitution is.

If Teen Challenge and similar faith-based ministries want to reclaim their liberty to rehabilitate teens in accordance with the commands of God instead of the commands of the DHR, then a simple lawsuit should do the trick. The sooner they assert their constitutional rights, the sooner they can get back to helping the Adam Browns who come to them seeking freedom from sin, reconciliation with God, and the opportunity to be the heroes that our society needs.

Matthew Clark is an attorney with the Foundation for Moral Law in Montgomery. He graduated from the Liberty University School of Law in 2012 and served as a law clerk and staff attorney to Chief Justice Roy S. Moore of the Alabama Supreme Court from 2013-2016. Clark owes everything to his Lord Jesus Christ, who loved him and gave Himself up for him. 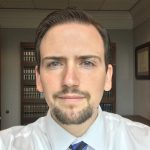