Roy Moore and his attorney and supporters walk out of the Supreme Court Chamber, in Montgomery, Ala., on Thursday October 27, 2016 before the lottery is held to pick the judges who will hear his appeal.

On Wednesday morning, a candidate for U.S. Senate threatened to sue his state’s largest newspaper group.

By Wednesday evening, that news was so old, so inconsequential and so boring that it had been bumped entirely from news websites across Alabama.

Roy Moore threatened to sue al.com, took the initial legal steps to do so, and it barely registered.

Because Wednesday, to use the proper journalistic description, was nuts.

By noon that Moore-threatens-newspapers story was mostly gone forever. That’s because Moore’s attorney, Trenton Garmon, with some time between ambulance runs, decided to appear on MSNBC to offer an answer to the mounting allegations of Moore’s inappropriate, possibly illegal, interactions with several teen girls in the late 1970s.

It did not go well.

Garmon, apparently of the belief that anyone of Middle Eastern or Indian descent is familiar with arranged marriages, decided his best approach was to bring up the “background” of MSNBC host Ali Velshi, who was raised in the mystical land of … Toronto.

Undeterred, Garmon pressed on, apparently attempting some explain Moore’s odd behavior, including asking girls’ mothers for permission to date their under-18 daughters, by chalking it all up to “cultural differences.”

And that wasn’t close to the craziest thing that happened on Wednesday.

Later in the afternoon, Moore’s camp held a press conference to discuss …. the handwriting in a yearbook owned by Beverly Young Nelson, who claimed on Monday that Moore sexually assaulted her outside of the Gadsden restaurant where she was working in 1977.

At that press conference, another Moore attorney told reporters that he had been around Moore for years, including in the presence of at least “10,000 different ladies,” and had never witnessed any inappropriate behavior.

They attacked the signature in Nelson’s yearbook, demanding that she and her attorney turn it over for handwriting analysis — a demand that Nelson promised to meet if Moore would agree to testify under oath before a Senate judiciary committee. Moore’s camp also noted that he had presided over Nelson’s divorce case.

The press conference did little to sway public opinion back in Moore’s favor, but it was the first clear indicator that he planned to actually fight.

However, all of that was undermined minutes later, as al.com dropped another story featuring two more women. One woman claimed Moore grabbed her butt as she left his office after a meeting in 1991. Another who was a teen at the time said she was working as a waiter at the Red Lobster when Moore asked her out.

Not to be outdone, the Washington Post followed with a story of its own, this one detailing the trouble Gena Richardson, a 17-year-old high school senior back in 1977, had with Moore. After Richardson turned down Moore, he called her at school, had her pulled from Trig class so he could ask her out again.

And still, we were not finished with this.

There also was a Moore tweet challenging Senate Majority Leader Mitch McConnell to “bring it on.” And there was the revelation that Moore’s campaign has faked an endorsement letter allegedly signed by 50-plus pastors. The letter displayed on Moore’s wife’s facebook page wasn’t written after the allegations of impropriety surfaced, as it was couched.

Instead, it was an old letter of support from the pastors, with the top few lines and original date edited out.

And while all of this was going on, somewhere behind a curtain, the real work was being done.

The Republicans were trying to pull off a heist and steal this election away from Doug Jones.

Politico reported late Wednesday that Senate Majority Leader Mitch McConnell was considering a number of schemes, including having current Sen. Luther Strange — who lost to Moore in the GOP primary and runoff — resigning his seat and thereby forcing a new special election.

There are also other ideas, or ways to get around the people of Alabama actually going to the polls and voting for the candidates who were nominated by voters.

I’m not defending Moore specifically, but if you can toss a duly nominated candidate off a ballot just before the election because you’re afraid he’s going to lose, where does that stop? Can the party in power just manipulate all elections?

It’s not right, what’s happening in this race for Senate. Moore won the nomination fair and square and he’s not done anything since that would be disqualifying. The Alabama GOP steering committee is said to have basically decided the same on Wednesday when it met. A source close to the talks said the ALGOP has no plans to decertify Moore or push a write-in candidate.

But that doesn’t mean the efforts to undermine this election and save a horrible candidate for the party are over. The GOP will use this circus-like atmosphere and the very real concerns of voters as cover to manipulate anything they can. 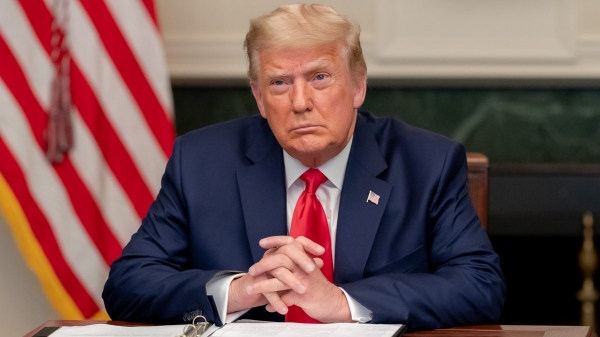 "We’ve all now heard a desperate and maniacal president say a bunch of quiet parts out loud."