In an interview with Chuck Todd on MSNBC, Doug Jones, the Democratic Party’s nominee for U.S Senate, stated that he is “a firm believer” in unrestricted abortion for the entire nine months of pregnancy. Jones wholehearted embrace of the abortion holocaust is truly horrifying. According to his ideology, a mother’s womb is a free-fire zone from conception to the moment of birth. Jones’s candidacy is a stark reminder of how ungodly the Democratic Party has become.

The Declaration of Independence states that “all men are created equal.” People are “created” at the moment of conception, not the moment of birth. Not only are we all created equal in the sight of God but we are also endowed by our Creator with “certain unalienable rights, that among these are life ….” Life as the gift of God is surrounded with the fiery injunction: “Thou shalt not kill.” The Bible prohibits murder because human life reflects the image of God. “So God created man in his own image, in the image of God created he him; male and female created he them.” Genesis 1:27.

Abortion ideologues like Jones spurn the teachings of the Bible and, with the assistance of ungodly judges, have created an annual national carnage of a million unborn human lives. The Jones mentality is not that “all men are created equal,” but that “all men are created subject to death before birth.” The debt of blood America has accumulated from this slaughter is far more ominous than the national debt. The abortion debt is owed to God, and “who shall stand when he appeareth?” Malachi 3:2.

Stephen Douglas argued in his great debates with Abraham Lincoln that new states should have the freedom to choose to enslave black people. He called it “popular sovereignty.” Lincoln noted that he had never met a white man who wanted to have that freedom exercised at his expense. The slave mentality, treating another human being as property that may be disposed of at the will of its owner, is at full flower in the abortion culture. Jones, as an abortion zealot, is a lineal descendant of the slave culture. In the Senate on February 3, 1863, John Sherman of Ohio stated: “The idea that one man may hold property in the life of another, may sell him like cattle, is obnoxious to the common sentiment of all.” Yet Doug Jones, hearkening back to the obnoxious doctrine that one human bring may treat another like disposable property, unwaveringly endorses the slaughter of helpless infants in the maternal womb. Let us not forget that the two greatest villains in the Bible, Pharaoh and Herod, both ordered the slaughter of infants.

I am ashamed for the Democratic Party that they have nominated an abortion militant as their candidate for the U.S. Senate. Shall we sink deeper into the cesspool of sin and death that Jones lauds, inviting God’s judgment, or shall we again truly be one nation under God, revering his image in human life?

Martin Wishnatsky was a staff attorney for Chief Justice Roy Moore at the Alabama Supreme Court from 2013 to 2016. He has a Ph.D. in Political Science from Harvard University (1975) and a law degree from Liberty University (2012). 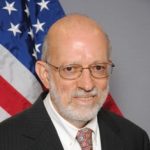