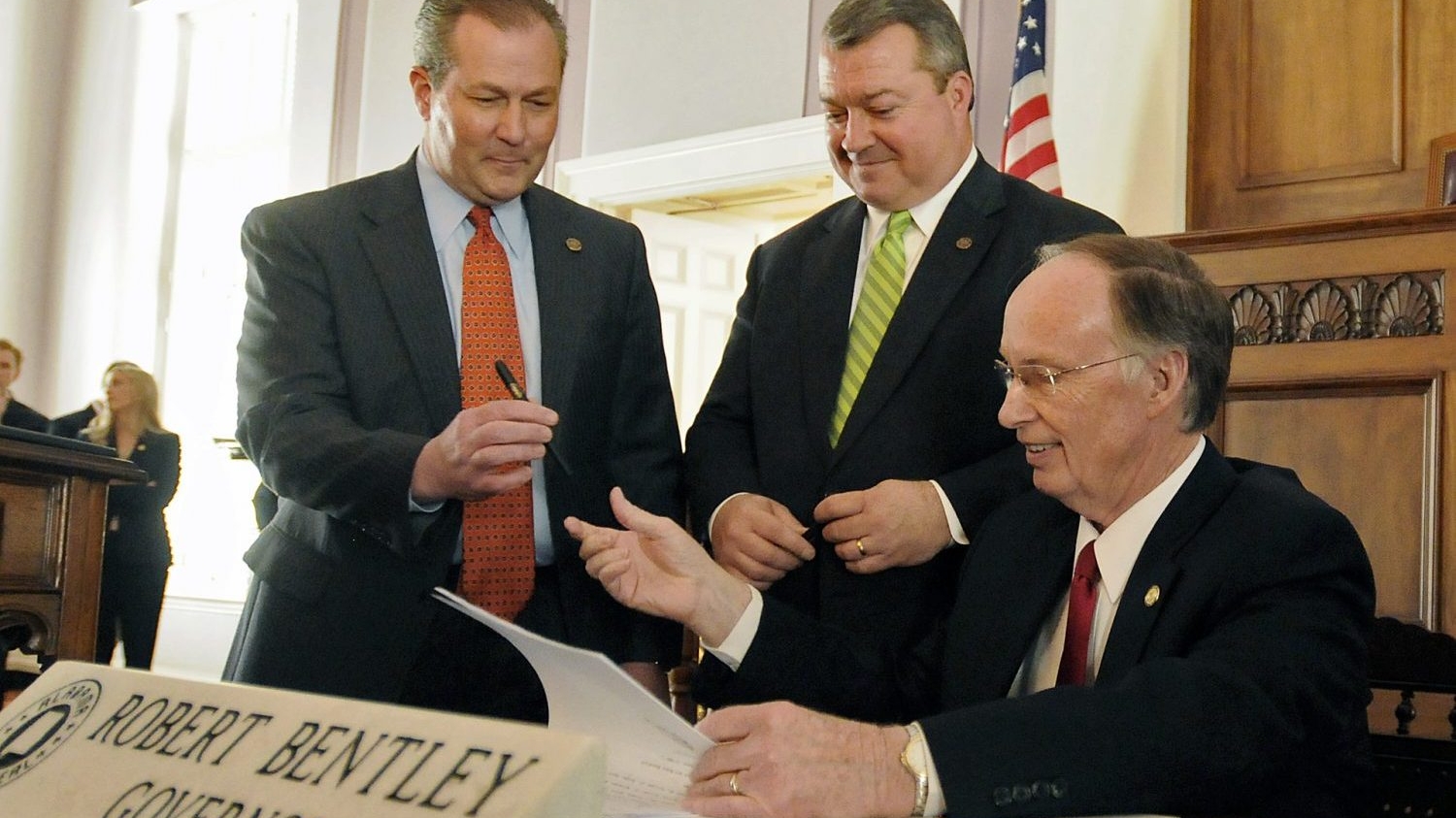 Alabama Gov. Robert Bentley, seated, passes a pen to Alabama Speaker of the House, Rep. Mike Hubbard, R-Auburn, left, as he signs into law the Responsible Budgeting and Spending Act with Rep. Greg Canfield, R-Vestavia Hills, in a ceremony at the Alabama State Capitol in Montgomery, Ala., Friday, March 11, 2011. The bill, sponsored by Canfield, is the first passed in this year's regular legislative session and allows for a "rolling reserve" process to make the Education Trust Fund resistant to proration. (AP Photo)

Sometime after 10 a.m. today, the Alabama Senate will take up HB317, a bill to exempt a specific class of individuals from the state’s ethics laws.

During a hearing on the bill before the Senate Fiscal Responsibility and Economic Development Committee, Senate President Pro Tem Del Marsh told the committee members that the legislation was, “of utmost importance.” Marsh’s pleas have been echoed by a host of players without any of them making a case as to why the measure is so urgently needed.

Often, understanding who is supporting a piece of legislation answers why it is of “utmost importance.” Likewise, it is critical to know who is not in favor of the measure.

HB317, as initially conceived, is reportedly the brainchild of Commerce Secretary Greg Canfield, who was appointed to his post by disgraced Gov. Robert Bentley.

When the initial bill’s flaws were pointed out, Canfield turned to another Bentley appointee – Attorney General Steve Marshall, and together they teamed with lawyers from Bradley Arrant to rewrite HB317.

Both of these flaws have repeatedly been pointed out in media reports and committee meetings, but Canfield, Marshall and those supporting HB317 have refused even to acknowledge these provisions exist in the legislation.

Marshall has said the bill was written by or in cooperation with the AG’s public corruption unit led by Matt Hart, which after further study, it appears Hart only wrote a section that doesn’t include the offending language added by Bradley Arant lawyers.

However, no one has heard directly from Hart or Albritton, and according to those close to the action, both have been notified to stand down or face dire consequences.

According to multiple lobbyists speaking on background, Will Brooke, co-founder of mega investment firm, Harbert Management Corporation, is pushing HB317. Brooke played a significant role in the conviction of former Speaker Mike Hubbard on felony ethics violations. Brooke’s cooperation with the state’s prosecution is what kept him from being charged along with Hubbard. Brooke is said to see the “less than full-time” clause as a way to influence lawmakers, like Hubbard, in the future without fear of legal entanglements. As a less than full-time economic development professional, Brooke or anyone else, for that matter, would not be constrained in giving boatloads of money to public officials. It is worth noting that Brooke’s company gave Marshall’s campaign $60,000.00 last month.

Also working hard to pass HB317 are lobbyists from Regions Financial Corporation, which is believed to be currently under investigation due to its involvement with the downfall of State Rep. Oliver Robinson, who over the last few months pleaded guilty to accepting bribes to his foundation. Regions purchased thousands in advertising in Robinson’s foundation newsletter. It is rumored that Regions is funding other lawmakers with similar arrangements.

Also, lobbyists for BCA’s Billy Canary are working to pass HB317. Canary, like Brooke, was deeply involved with Hubbard and his schemes to use his office for personal gain and, like Brooke, testified against Hubbard to avoid prosecution.

The Senate Fiscal Responsibility and Economic Development Committee is chaired by State Sen. Phil Williams, who is stepping down from office at the end of his term. Williams was under investigation by state law-enforcement until then Gov. Bentley stepped in to help “his brother in Christ,” as former members of Bentley’s staff recalled his moniker for Williams.

Williams, after his first year in the state Senate, amassed a consulting business that netted him some 37 clients, which law enforcement believed to be illegal. While Williams has maintained his innocence, it is reported that upon his retirement from office, charges may be filed against him.

And in the end

Bentley appointees, Hubbard’s companions and the ever-present remnants of former Gov. Bob Riley’s machine have all come together it appears to push for a bill, which will benefit a few, while weakening the laws without a specific immediate need.