For folks like me, a progressive living in this regressive state, the uphill climb towards electing a good number of forward-thinking, intelligence-valuing lawmakers in this state often seems roughly equivalent to scaling Everest with asthma.

Then there are days like the final ones of the 2018 legislative session, when you guys give me that glimmer of hope.

Yeah, sure, it’s by doing awful, awful things — that I really shouldn’t feel good about — but I’m choosing the positive outlook.

Your stupidity, crookedness and callousness will eventually lead to your demise.

At least, that’s what I believe. Otherwise, there’s simply no hope left for this place, and I can’t believe that. There are too many good and decent people here.

So, I choose to believe that eventually, the sins of these ignorant men and women will be their undoing.

And there are signs this is true.

When Doug Jones beat Roy Moore last December for a U.S. Senate seat, that victory was mostly oversold nationally as evidence of a Democratic resurgence.

It wasn’t. Moore was the worst candidate in modern political history and had the absolute stupidest campaign — one filled with grifters, con artists, carnival barkers and half-wits — in the complete history of politics.

But that doesn’t mean there was no progress at all.

Black voters were particularly organized and energized in that race, turning out in numbers that rivaled minority participation in President Obama’s 2008 run. That’s an ominous sign for Republican lawmakers who have never, not one single time, bothered to alter or soften their positions to better attract minority voters.

Speaking of, that same group of Republicans just balked at passing a bill that would require demographic data be compiled on all traffic stops in the state and then that information studied to identify issues with racial profiling.

A sitting black senator brought this bill, and did so after detailing his personal experience being stopped in his own neighborhood without cause. Other black lawmakers shared their experiences with racial profiling by police. Former cops who are now lawmakers admitted on the floor of the House that racial profiling is a problem within Alabama police forces.

And yet, a bill that would have simply gathered the data, studied it and allowed the attorney general’s office to take corrective action was voted down.

For minority citizens in this state, this isn’t a political issue. It’s a life-or-death issue. And for a minority voting bloc that was already motivated, adding in a dash of anger and legitimate fear certainly won’t hurt the turnout numbers.

There aren’t many more anger-inducing acts than a bunch of elite lawmakers carving legal exceptions for themselves and their millionaire pals.

That was the case with HB317, a rewrite of state ethics laws that exclude “economic developers” from lobbying laws. It is an obvious and clumsy scam — one designed to hopefully get investigators off the backs of state officials and powerful businessmen.

Make no mistake about it, it is not an exception that aids the average Alabamian or in any way bolsters economic development.

And here’s how you know that: When asked repeatedly by Democrats (and even some skeptical Republicans) to name one instance in which economic developers being required to register as lobbyists had hurt Alabama’s economic development projects, no one could.

Hell, they couldn’t even make up an example.

Yet, with nearly half of Senate Republicans and every Democrat voting against this thing, and with 22 Republican abstentions in the House, this crooked bill passed.

Which makes me angry, but also so very hopeful.

These are the types of bills that very often represent a turning point for governments. You can only beat down, ignore and rob groups of people for so long before they take a stand. And at this point, the groups due to take a stand are overwhelming.

The Alabama Republican Party spent the 2018 legislative session screaming this at all of you.

Maybe you should listen.

Jones is joined by other Georgetown fellows including the Associated Press's Julie Pace and DNC Chairman Tom Perez. 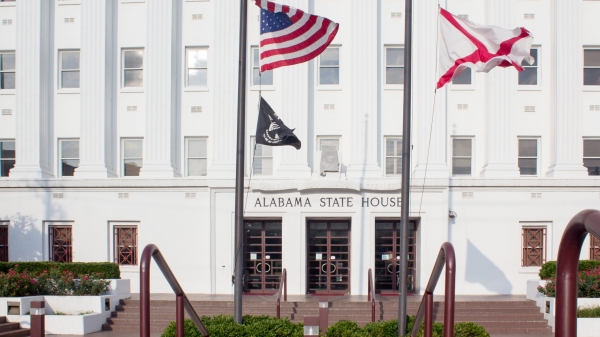