The Governor’s Office late Friday announced Gov. Kay Ivey signed into law HB317, a piece of controversial legislation that will essentially exempt a class of individuals dubbed “economic development professionals” from having to register as lobbyists under the state’s ethics laws.

The legislation, sponsored by Rep. Ken Johnson, R-Moulton, in the House and carried by Senate President Pro Tem Del Marsh, R-Anniston, in the Senate, faced backlash from several lawmakers on both sides of the aisle who said the changes contained in the bill would weaken the state’s ethics laws.

Proponents of the new law say it ensures that Alabama will “remain open for business” and prevents the state from falling behind others in terms of economic development projects.

The legislation clarifies that economic development professionals don’t need to register as lobbyists, a class of individuals who are subject to stricter ethical guidelines.

“House Bill 317 enables Alabama to remain on a level playing field with other states, as we compete for job creating capital investments. Our ability to attract highly sought economic development projects is vital to ensure that Alabama continues to experience record-low unemployment,” Ivey said in a statement Friday.

Several senators, both Republicans and Democrats, threatened to filibuster an earlier version of the bill during the last week of this year’s legislative session, threatening to throw the last week into crisis.

Those senators later decided against filibustering after several changes were made to the law to clarify that the exemption would not be available to lawmakers, lawmakers who recently left office and those who would otherwise have to register as lobbyists.

Economic development professionals, who are considered to be individuals working to advance a “specific, good faith economic development or trade promotion project or related objectives,” will also be barred from lobbying the Legislature for any new incentives unless they register as a lobbyist.

Without registering, they will only be able to discuss with public officials already existing statutory or constitutional incentives already available.

The opposition to the bill was led in the Senate by Sen. Dick Brewbaker, R-Montgomery, and Sen. Paul Sanford, R-Huntsville, who both said the exemption was too broad and should be narrowly defined to only include a small group of economic developers dubbed site selectors. Those individuals, of which there are fewer than 100 in the state, help companies navigate where to locate economic development projects.

Other Republican senators, including Sen. Trip Pittman, R-Montrose, had other critiques of the bill, and no Democrats voted for the bill in the Legislature’s upper chamber. The debate was equally divisive in the House last week when Democrats and a few Republicans attempted to hold up the bill’s passage there, too.

By a vote of 52 to 22 with a large contingency of 22 abstentions, the House concurred with changes made in the Senate last week.

Opponents said economic developers often engage in lobbying and broadly exempting them from the ethics laws could create a problem. Later, once the question was raised, the Ethics Commission punted clarification to the Legislature.

“The Ethics Commission basically would not take a position on that issue, and because they wouldn’t take a position, the uncertainty among economic developers and site selectors, they were hesitant to play out in the arena in Alabama,” said Senate President Pro Tem Del Marsh, R-Anniston, after the bill passed last week.

Ivey, Attorney General Steve Marshall and Commerce Secretary Greg Canfield put their weight behind the bill after initial changes were made in the Hosue earlier this year. Marsh, one of the state’s most powerful politicians, carried the legislation in the Senate, using his muscle as the top lawmaker in the Legislature’s upper chamber to get the legislation through in the final weeks of the session.

“It was a very tight piece of legislation,” Marsh said. “It dealt strictly with economic developers and site selectors, and it has a one-year sunset on it. I think it’s about as tight as you can get.”

Changes made in the Senate just before the bill passed last week added a one-year expiration date, or sunset provision, requiring lawmakers to either reauthorize the bill next year or include it in a broader re-write of the ethics laws.

Sen. Phil Williams, R-Rainbow City, who sponsored the final changes in the Senate, said the sunset provision would ensure that lawmakers come back and fix any issues in the legislation.

“The only people who will have the opportunity for the exemption are the true economic developers that were never intended to be in the (ethics) bill to begin with,” Williams said of the bill.

Other changes to the law include: 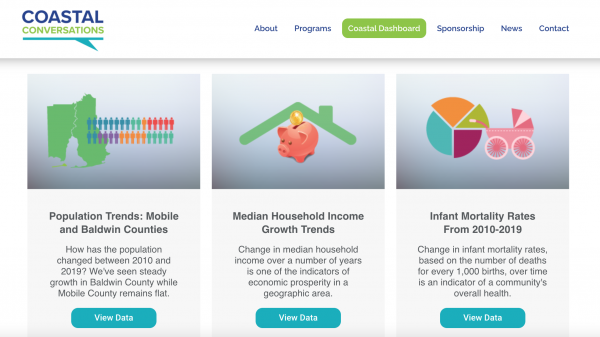 The Coastal Dashboard puts a range of metrics for the coastal region’s health and performance in one place.