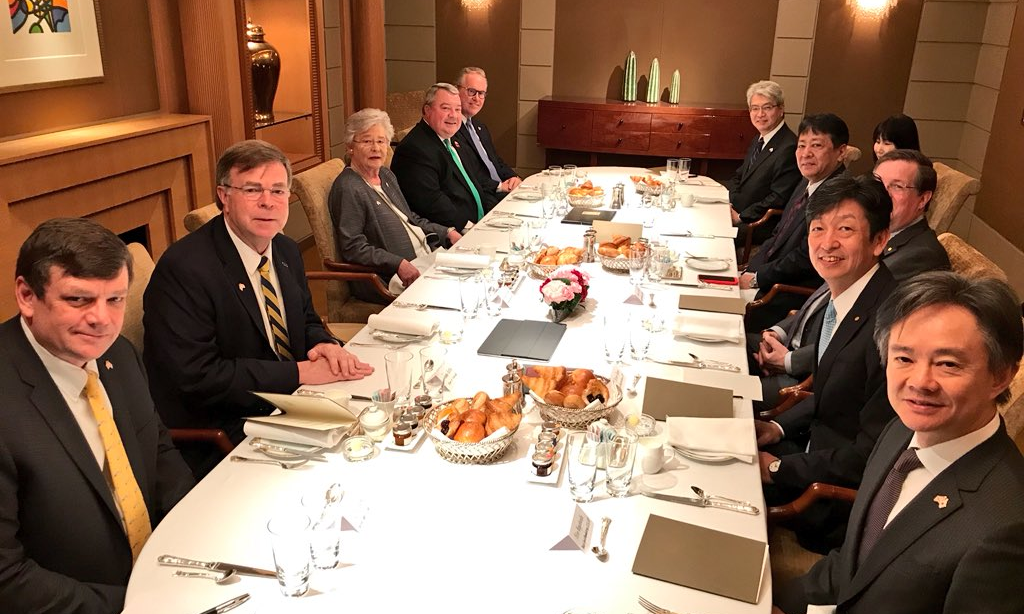 They said that the meetings with high-level executives from Mazda, Toyota, and Honda in Japan helped to fortify the state’s relationships with the global automakers and will facilitate their growth plans in Alabama. They also met with U.S. Ambassador to Japan Bill Hagerty. The group traveled to Tokyo on Tuesday.

“Creating jobs is a team effort built upon solid relationships with business and industry leaders,” Ivey said. “When Mazda Toyota Manufacturing announced they were coming to Alabama, they chose to make this announcement in Montgomery, a sign of their support for the current direction of our state and a clear indication of the quality of our relationship. By visiting with Mazda, Toyota and Honda in their home country, we have continued to kindle our relationship with these fine companies and have returned the respect they showed by meeting with me at the State Capitol in recent months.”

Mazda and Toyota are preparing to build a $1.6 billion assembly plant in Limestone County that will have 4,000 workers at full production. When production launches in 2021, Mazda Toyota Manufacturing USA, as the operation is known, will become the first new assembly facility to open in Alabama in more than 15 years.

Huntsville Mayor Tommy Battle accompanied Ivey and Canfield on the trip and participated in their talks with Toyota and Mazda.

“As Mayor of Huntsville, I made creating jobs my #1 goal,” Battle said on social media. “Over the past 10 years, we’ve created more than 24,000 jobs in our region. Don’t settle for the same old, tired, underwhelming rhetoric. Alabama has the talent, the workforce and the ability to dream big.”

“A goal of the mission was to reiterate our support for the development and implementation of the Mazda-Toyota joint venture’s supply chain strategy for the new assembly plant,” Canfield said. “The supplier network will be substantial, and we’d like to see it anchored in Alabama.”

Mazda and Toyota executives told the Alabama team that the project remains on target, with construction work at the Limestone County site scheduled to begin by October 1. The Alabama officials assured the automakers that the production facility site will be graded and prepared for construction on that timeline.

Governor Ivey told the automakers that AIDT, the state’s primary workforce development agency, is ready to engage with them on developing a workforce program and suggested a near-term meeting to launch the process. AIDT has been involved in building Alabama’s auto industry workforce for 25 years.

“Alabama has a wealth of resources that can help these great automakers build their businesses in the state, ranging from first-class contractors that can assist with construction to research universities eager to collaborate with them to discover technical advances and new processes,” Governor Ivey said. “With this mission, we strengthened our critically important partnerships with these automakers and continued to make clear our commitment to helping them create jobs and grow over the long term, not just in their current locations, but throughout Alabama.”

At Honda, the Alabama team received an update on an expansion at the automaker’s Talladega County plant that was announced in 2017. The $85 million project will improve manufacturing flexibility at the Alabama factory. The group also got a briefing on new, advanced technologies that could possibly be introduced at the plant.

Honda’s $2.6 billion Alabama facility has more than 4,500 employees and produces around 340,000 vehicles and V-6 engines each year.

The appointment with Ambassador Hagerty focused on the strength of the U.S. auto industry, particularly in the Southeast, where the sector continues to expand.

“From my first day in office, I set out to improve Alabama’s image and to make clear to the world that Alabama is open for business,” Ivey commented. “I thoroughly enjoyed my visits with the Ambassador as well as the company executives. Their invitations to Japan is a sign they recognize the positive business climate we have created in Alabama and represents their desire to continue to be a part of our current economic momentum.”

Employment in the state’s auto industry currently tops 40,000, a figure that has increased 150 percent since 2000, according to data from the Alabama Department of Commerce.

Battle and Ivey are both running for governor in the Republican Primary.

“It’s my fifth trip to Japan in the last few years,” Battle said.  “These business trips are always fantastic. Thank you @GovernorKayIvey for going with us this time. Had a great meal as we discussed how to grow Alabama’s economy & extend relationships w/ our Japanese business leaders.”