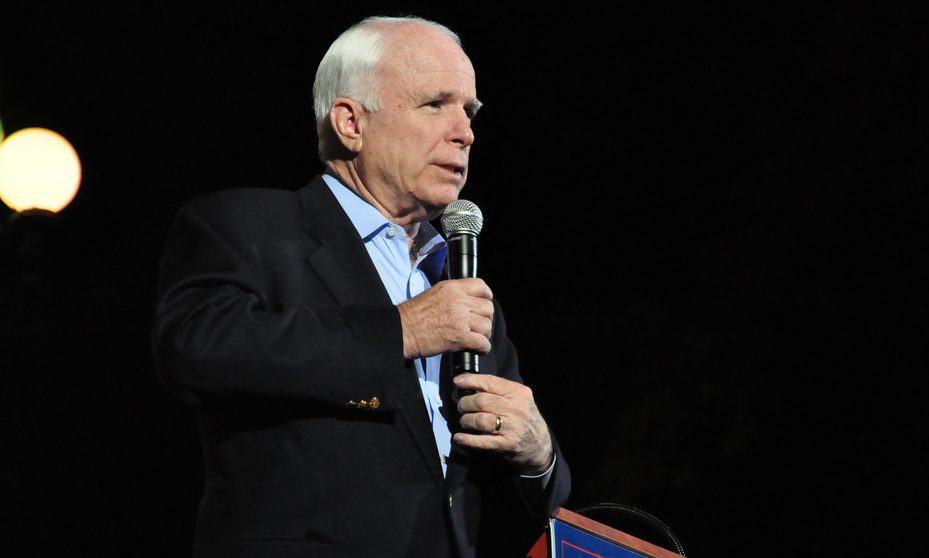 The Senior Senator from Arizona John McCain (R) died Saturday from brain cancer after a lengthy illness. McCain ran for President twice and won the Republican nomination in 2008. The people of Alabama overwhelmingly preferred McCain; but then Illinois Senator Barack H. Obama (D) won the presidency instead. Many Alabama leaders had statements of condolences upon learning of McCain’s passing at the age of 81.

U.S. Senator Richard Shelby, R-Ala., said, “John McCain was a brave American and a true hero – one who honorably served our country for 60 years. His distinguished presence in the Senate will be missed, and his unwavering commitment to our country will live on in his legacy. The McCain family remain in our thoughts and prayers during this hard time.”

U.S. Senator Bradley Byrne, R-Montrose, said, “Last year, I had the opportunity to visit the “Hanoi Hilton” with Senator McCain, where he was held captive. It was a remarkable experience that I will never forget. May his service to our country never be forgotten. His family, friends, and colleagues will be in our prayers.”

The Speaker of the Alabama House of Representatives Mac McCutcheon, R – Monrovia, said, “As Speaker of the Alabama House, I would like to express the body’s deepest and most heartfelt condolences upon the passing of a great patriot, U.S. Senator John McCain. John McCain devoted a lifetime of service to his country as a naval aviator and prisoner of war and, later, as a member of the U.S. House and Senate. Just as when he turned down the early release offered to him by his North Vietnamese captors, Sen. McCain turned his back on the easy route of quiet military retirement and thrust himself into the combative and turbulent public arena because he felt his country’s call.”

“Even when he sometimes took positions in the U.S. Senate that disappointed conservatives, his sense of sacrifice, perseverance, and duty to nation was always recognized, admired, and celebrated,” Speaker McCutcheon continued. During the 2008 presidential campaign, he carried the Republican Party’s banner as its nominee, and he ran a strong and competitive race even when a historic economic downturn and the effects of an increasingly unpopular war conspired against him. Our thoughts and prayers of contentment go out to the McCain family during this time of loss.”

“John McCain was a fierce warrior in every sense of the word whether he was fighting the North Vietnamese who held him captive, promoting the issues in which he believed on the floor of the Senate, or battling the aggressive brain cancer that ultimately took him,” Ledbetter continued. “His examples of bravery, resilience, and devotion to his country are legendary. While a prisoner of war in Vietnam, he turned down an early release and, instead, organized resistance efforts against his captors while working to buoy the spirits of his fellow POWs.”

“As a member of the U.S. Senate, he promoted a strong and well-funded military, sought to recover the remains of servicemen who were listed as POW/MIA for decades, and helped heal the wounds of the Vietnam conflict by returning to visit the ‘Hanoi Hilton,’ where he was once held captive,” Ledbetter said. “While some of us may have differed with him politically from time to time, no one can question his commitment to our nation and to charting what his heart believed was the right course. We pray that God will give comfort to Sen. McCain’s family as we celebrate the example of selfless public service that he leaves behind.

“Like several of my Facebook friends, I had the honor of meeting Senator John McCain when he visited Montgomery in 2007,” State Representative April Weaver (R) added. “While some of us may have differed with him politically from time to time, no one can question his bravery, commitment to our nation and love for our country. Rest In Peace, Senator John McCain. Thank you for your service! You are a true American hero.”

House Speaker Paul Ryan, R-Wisconsin, said, “This is a sad day for the United States. Our country has lost a decorated war hero and statesman. John McCain was a giant of our time—not just for the things he achieved, but for who he was and what he fought for all his life. John put principle before politics. He put country before self. He was one of the most courageous men of the century. He will always be listed among freedom’s most gallant and faithful servants. Our hearts are with his wife, Cindy, his children, and his grandchildren. This Congress, this country mourn with them.”

2012 Republican presidential nominee Mitt Romney said, “No man this century better exemplifies honor, patriotism, service, sacrifice, and country first than Senator John McCain. His heroism inspires, his life shapes our character. I am blessed and humbled by our friendship.”