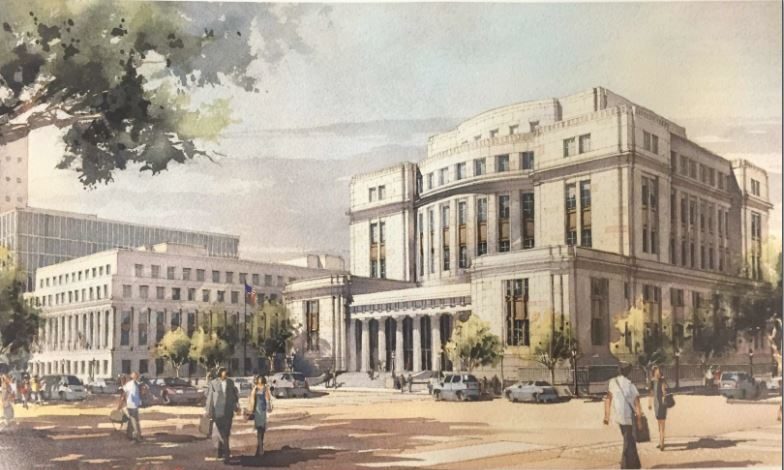 Friday, U.S. Senator Richard Shelby (R-Alabama) delivered remarks at the dedication ceremony for the new federal courthouse for the Southern District of Alabama in Mobile.

“Today’s dedication is a historic moment for the city of Mobile, the Southern District of Alabama, and the Eleventh Circuit,” said Senator Shelby. “It is my hope that decisions made in this new federal courthouse will uphold the rule of law and the values upon which our nation was founded. I am proud of the tireless efforts of all those involved in the process. This courthouse will without a doubt have a major impact on the Southern District of our state for years to come.”

Shelby’s office said that the new state-of-the-art judicial complex is located directly north of the existing 80-year-old John Archibald Campbell Courthouse and will be a 155,000-square-foot building that will take up the entire block at the corner of St. Louis and St. Joseph streets.

The new state of the art facility was built with various modern upgrades, including advanced security and new technology, along with improved public access.

The opening of this new federal building is the first step in completing a two-part federal project.

Employees have moved from the old Campbell courthouse to the new facility. This will allow renovations of the 80-year-old courthouse building to progress. The renovated facility will house federal bankruptcy courts, probation offices, appeals offices, and U.S. congressional offices.

The 115,015 square foot John Archibald Campbell Courthouse was constructed in 1932 and is listed on the National Register of Historic Places. The project includes re-using four existing courtrooms and seven existing judges’ chambers. The repairs and alterations include: improved accessibility; perimeter security improvements; building façade cleaning and maintenance; window replacement; HVAC, plumbing and electrical improvements; hazardous materials abatement; replacement of the emergency generator; a new fire suppression system including fire pump. All interior work will be completed in accordance with the Secretary of Interior’s standards to maintain the historic integrity of the building.

Last month, Jeffrey Beaverstock of Mobile, Alabama, and Judge Terry Moorer of Greenville, Alabama, were confirmed by the Senate to be U.S. District Judges for the Southern District of Alabama. Beaverstock and Moorer were both nominated by President Donald J. Trump (R) in September 2017. Democrats have been obstructing the confirmation process of Trump’s nominees to the federal court system.

Senator Richard Shelby is the Chairman of the powerful Senate Appropriations Committee and is currently in his sixth term in the U.S. Senate.