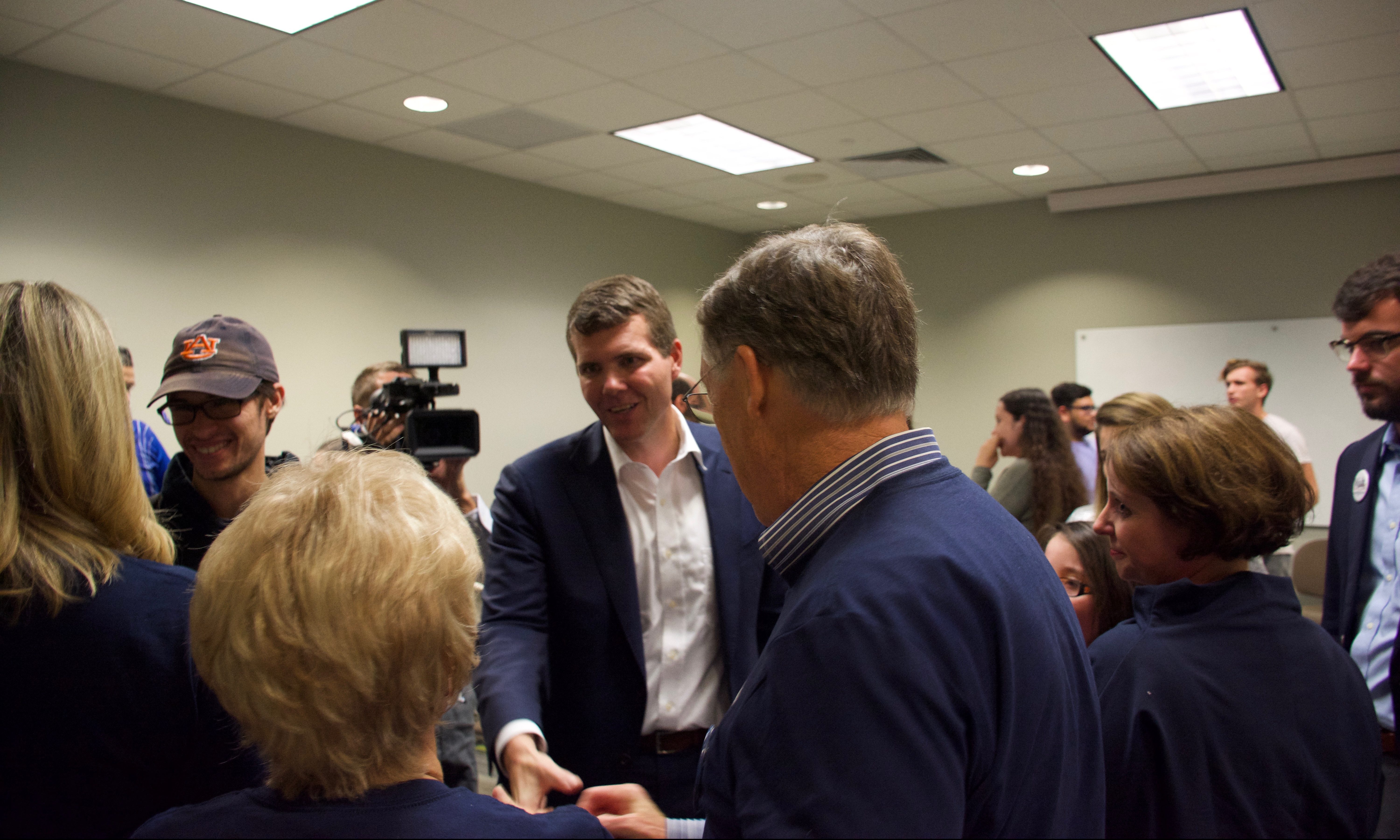 Democratic gubernatorial candidate Walt Maddox told a crowd gathered at Auburn University Monday night that next week’s election is winnable if he and other Democrats are able to garner turnout similar to that in last year’s special election for U.S. Senate.

Speaking to the Auburn University College Democrats, Maddox said his campaign’s internal data and his observations over the last few weeks of the campaign make him optimistic going into the final week before voters head to the polls on Nov. 6.

“We have to have a base turnout similar to Doug Jones in 2017. Without that, we can’t win, but I believe we can,” Maddox said. “I’m beginning to see signs.”

With little to no public polling, it’s nearly impossible to say which direction the election is heading, but recent elections and fundraising numbers suggest Republicans dominating the race. Maddox would be Alabama’s first Democratic governor in more than a decade.

Maddox, on the other hand, has reported far more individual donors to his campaign than Ivey over the course of the last three weeks. And he encouraged the college students to volunteer for Democratic candidates, saying people power is more important than money.

The Democratic nominee said he has seen a backlash to Ivey’s refusal to engage in a public debate with him.

“Alabamians, by our very nature, we rise to every challenge, and we don’t run away from it,” Maddox said. “I think a lot of Alabamians have a lot of concern about that. … I think it’s very winnable.”

Maddox said he believes Ivey won’t debate him because she doesn’t have answers for issues like Medicaid expansion and an education lottery.

Maddox has favored Medicaid expansion while Ivey has not. And while Ivey has said she would support a public referendum on a lottery, she has largely punted the issue to the state Legislature.

The Republican-dominated Legislature would have to authorize such a referendum to alter the state’s Constitution, which currently prohibits a lottery, but Maddox has said he would call a special session to force the Legislature to take up the issue.

Maddox cited the payment of Bentley’s legal bills as an example of enabling corruption.

“Why are we continuing to pay over $400,000 in legal fees?” Maddox said. “It’s all these questions that can’t be answered. If you’re not transparent now, just imagine what happens if you’re elected to the office. I don’t think answering those questions is something she wanted to do.”

Maddox repeated his calls for the state to expand Medicaid to individuals making up to $16,753 and families of three making $28,676. Alabama’s Medicaid requirements are currently some of the strictest in the country, and the program is limited to children, those with disabilities and the elderly. Adults without children rarely qualify and those with kids only receive benefits if they make less than 18 percent of the poverty line. That’s less than $4,000 a year for a family of three.

Republicans have resisted expanding Medicaid since the state became eligible to receive federal matching money six years ago. Republican state legislators have refused to expand the program because of a state match that would be required. Although federal money would have covered nearly all of the expansion costs over the past six years, federal matches have now dropped to about 90 percent, where they are expected to stay.

Meanwhile, Democrats have largely championed such an expansion. The Democratic nominee for governor said he would sign an executive order on day one to expand Medicaid. Either way, the Legislature would need to approve the expansion and they would have to handle the budget reverberations that would follow.

The state’s hospitals, which have suffered budget cuts and closures over the past decade, have sought expansion to keep hospitals, particularly those in rural areas, open.

Maddox said the state could pay for the expansion without having to raise taxes.

“The state of Louisiana is paying for their Medicaid expansion through the savings they’ve generated through their existing Medicaid program. In fact, it was $199 million in Fiscal Year 2017,” Maddox said.

While he said he wouldn’t budget for those savings if he’s elected, he said expanding the program would provide an economic boon for the state, which could provide new revenues to pay for the program.

“How we want to propose paying for the Medicaid expansion is the 30,000 new jobs that are created,” Maddox said. “We want to do similar to other economic development projects and take the payroll taxes and income taxes generated by those 30,000 jobs and escrow them into an account that would offset the state share of the Medicaid expansion.”

Maddox spent the majority of his time on Auburn’s campus touting his plans for an education lottery, telling students that were gathered to hear him speak that they stand to benefit most if his plan is enacted.

The Maddox campaign estimates an education lottery would generate $300 million in revenues that could be put toward public schools and college scholarships.

Maddox’s talk Monday comes after the second-largest lottery jackpot and the fourth-largest jackpot in history. Both jackpots — $1.537 billion and $687.8 — were won in the course of a week.

“The only losers from last week’s Mega Millions and Powerball were the students in the state of Alabama, because students elsewhere, they got their scholarship programs increased and they got their pre-K programs enhanced, and we didn’t do anything in Alabama,” Maddox said.