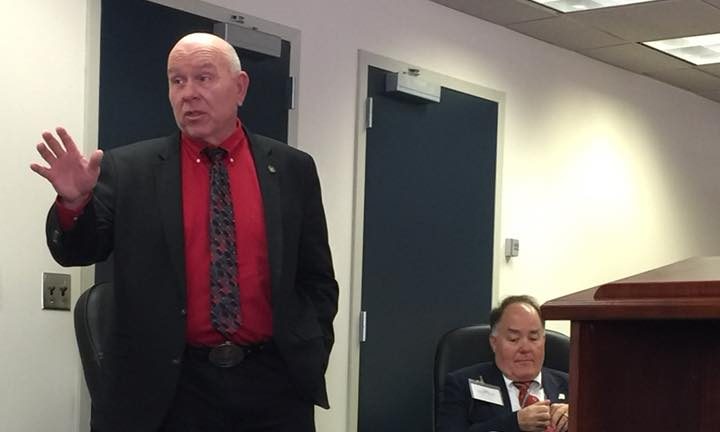 The FGA said this award is in recognition and appreciation of Rep. Hanes’ commitment to policy reforms that empower Americans through work and reduce dependency. FGA thanked Rep. Hanes for his tireless dedication to policies that allow Americans to experience lives of self-sufficiency and dignity.

“It’s an honor to be chosen for this award,” says Hanes. “We must enact welfare reform that reduces dependency on government. Part of the solution is having able bodied adults working. When a person earns a living it not only helps strengthen our economy, it restores confidence and self-esteem to individuals who know that they can be independent for themselves.”

Rep. Hanes’ bill, state House Bill 6, would prohibit the Department of Human Resources from requesting a waiver of federal work requirements for able-bodied adults without dependents who are applicants or recipients of food stamps. The legislation would require recipients to work, provide volunteer service hours or continue their education to receive SNAP benefits.

The Republican controlled U.S. House of Representatives passed a version of the five year Farm Bill that includes work requirements to receive food stamps for able bodied persons to receive food stamps (now known as the Supplemental Nutrition Assistance Program or SNAP). The elderly, the disabled, children, persons in federally approved job training programs, and the mothers of small children were exempted from the House work requirements. The Senate passed a version of the Farm bill without these requirements. The two versions of the farm bill were in a conference committee before the election recess. After Democrats were given control of the House last week, federal work requirements for SNAP assistance appears to now be dead for the foreseeable future.

Entitlement reform is essential to eventually balancing the federal budget; but will be difficult to achieve with divided government and a presidential election in just 24 months.

James “Tommy” Hanes Jr. was a professional firefighter before become a state legislator.  Hanes was just reelected to his second term representing District 23 in the Alabama legislature.  House District 23 includes parts of Jackson and DeKalb Counties.  Hanes and his wife Rhonda have been married for over 30 years. They have two daughters.